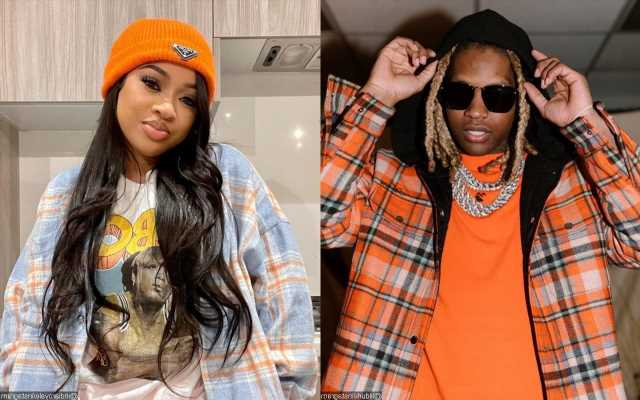 The ‘Laugh Now Cry Later’ rapper and his fiancee spark breakup rumors after she declares herself ‘a free agent’ on Twitter and stops following him on Instagram.

AceShowbiz –Lil Durk isn’t interested in seeing someone new, at least not for the time being, despite his alleged breakup from India Royale. Having sparked split rumors with his longtime girlfriend, the rapper has turned down a fan who tried to flirt with him via DM.

The fan tried to shoot her shoot with Lil Durk, whose real name is Durk Derrick Banks, after it was reported that he and India have called it quits. In a screenshot of their DMs, the fan wrote to the 29-year-old star, “Fck India Slide With London. I’ll treat you better she don’t appreciate you.”

Much to the fan’s disappointment, Lil Durk flatly turned down her advance. “On tooka grave ion want yo skinny broke a**,” he allegedly replied to the fan, who unashamedly shared the screenshot with a caption which read, “Dang my bad.”

The split speculation first arose after India removed pictures of herself and the hip-hop artist from her Instagram page. “I’m a free agent,” she tweeted on Saturday, September 10, in response to a fan’s question as to why she and Lil Durk are no longer following each other on photo-sharing platform.

When another follower asked if that meant she’s single, India liked that tweet. In another cryptic tweet, she wrote, “Stop sending me my tweets, baby, I know you see them.”

This isn’t the first time Lil Durk and India were hit with split rumors. Back in October 2021, the “Laugh Now Cry Later” emcee and his longtime girlfriend shut down the reports by sharing a PDA-filled picture on their respective social media accounts. “Y’all know damn well this s**t 4eva,” he simply captioned the picture showing them kissing.

In March of this year, Lil Durk showed his love for India by having a tattoo of his fiancee’s face on his leg. He was ridiculed by social media users over the body art.