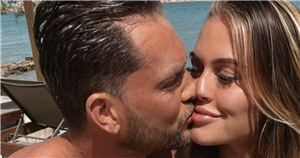 The 30-year-old former pro tennis player and the Tanologist founder, 24, are settling in at home with their first child after welcoming him to the world on 10 August.

Now Lewis has shared an adorable photo of Lottie, who is the younger sister of One Direction star Louis Tomlinson, cuddling their bundle of joy.

The stunning close-up snap shows the new mum holding her sleeping baby boy to her chest with both hands in a moving Instagram Stories post with no caption other than tagging Lottie and a red heart emoji.

The latest picture came after Lewis expressed his admiration for Lottie after she gave birth, posting a stunning snap of her on his Stories and writing: "Very proud of you, we are both lucky to have you," along with a baby emoji.

After announcing the news last week, Lottie took to social media to share her own adorable black and white shot of their son along with a sweet snap of her boyfriend carrying him out of the hospital.

She also reposting heart-warming congratulatory messages she and Lewis received on Instagram since the birth.

Lottie's younger twin sisters, Daisy and Phoebe, 18, were both quick to share tributes to their older sister and new nephew online too.

Phoebe posted a picture of Lottie from a recent photoshoot and sweetly wrote: "i am so beyond proud of you. He is perfect. love you both @lottietomlinson @mrlewisburton".

Daisy shared a photograph of her new nephew alongside a snap of older brother Louis' son Freddie, six, as she celebrated becoming an auntie for a second time.

Lewis and Lottie began dating after meeting at a party in 2020, before going public with their relationship during the festive period that year.

Ever since, they have regularly shared snaps of their romantic date nights and lavish holidays together.

Lottie announced her pregnancy back in February, with her and Lewis both sharing gorgeous snaps of her baby bump with the caption: "just the 3 of us," with a heart emoji.

In June, they threw an incredible blue-themed baby shower, which Lottie described as "a special day I’ll never forget".

She added she was "overwhelmed with love" and "so grateful" for her family, friends and Lewis, saying "I’m the luckiest."

As the begin a family together, the loved up couple are currently in the process of renovating their first family home.