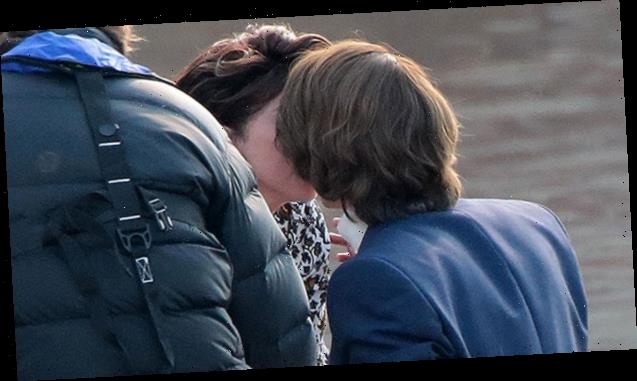 Lady Gaga and Adam Driver were photographed kissing while riding a boat through Lake Como in Italy. The kiss was professional; it was filmed for a scene in their upcoming crime movie, ‘House Of Gucci.’

Lady Gaga, 34, and Adam Driver, 37, are tapping into their roles as the formerly married couple Patrizia Reggiani and Maurizio Gucci. The co-stars kissed while the cameras rolled on the set of the crime drama film House of Gucci in Lake Como, Italy on March 18. The on-screen kiss happened amid a romantic boat ride outside the luxurious Villa Balbiano.

For the scene, Gaga and Adam effortlessly channeled the high-end style of Italian socialites; Gaga looked lovely a printed mini dress. Meanwhile, Adam looked like the heir of Gucci in a crisp blue tuxedo jacket, white turtleneck and oversized glasses.

Gaga also donned a short brunette wig to get into character. The “Rain On Me” singer is playing the ex-wife (Patrizia) of Maurizio, the former heir of Gucci (played by Adam). They tied the knot in 1973 and were known for their famous romance and lavish lifestyle. Patrizia and Maurizio divorced in 1991, and Maurizio later sold his stake of Gucci to Investcorp for $170 million in 1993. In 1995, he was killed by a hitman, and Patrizia was charged for plotting the murder in 1998. Despite being sentenced to 29 years in prison, she was released early in 2016.

Gaga first shared a photo of her and Adam transformed into their Italian characters on March 9. The co-stars rocked ’70s-esque winterwear: Gaga in a black turtleneck with puffy sleeves, gigantic fur hat and lots of gold jewelry, and Adam in a creamy cable knit turtleneck sweater and white snow pants. “Signore e Signora Gucci,” she wrote over the sneak-peek photo, which translates from Italian to English to “Mr. and Mrs. Gucci.”

Gaga and Adam were also spotted filming in Italy on March 11. Gaga was pictured stuffing Adam’s mouth with a pastry in front of cameras at La casa di Gucci Piazza Duomo, and both Oscar-nominated stars were again wearing retro ensembles. The movie production has been given “access to the [Gucci] house’s historical archive for wardrobe and props,” Gucci President Marco Bizzarri told WWD, which explains their spot-on outfits.