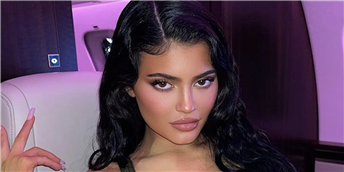 Kylie Jenner and baby no. 2 are "growing" and the 24-year-old's shadow proves it.

The reality star, who confirmed that she and rapper Travis Scott are expecting their second child this past September, shared a rare photo from her pregnancy on Thursday evening.

Jenner's artful shot displayed a shadowy projection of the makeup mogul's silhouette against a wall.

Though Jenner is still sparing when it comes to publicly documenting her pregnancy, she's certainly more open to sharing than she was when pregnant with Stormi, now 3.

Jenner has stepped out a number of times over the past month, and even shared commentary about her pregnancy in an image of her stomach posted to her Instagram Story. "Belly's getting big," she wrote in a snap taken from behind the wheel of her Mercedes.

The soon-to-be mother of two has been taking a sartorial cue from big sister Kim Kardashian lately, adopting a series of monochrome catsuits that fall in line with the newly 41-year-old's recent aesthetic. Jenner hasn't quite graduated to the full face covering level, but perhaps that can remain Kim-exclusive.