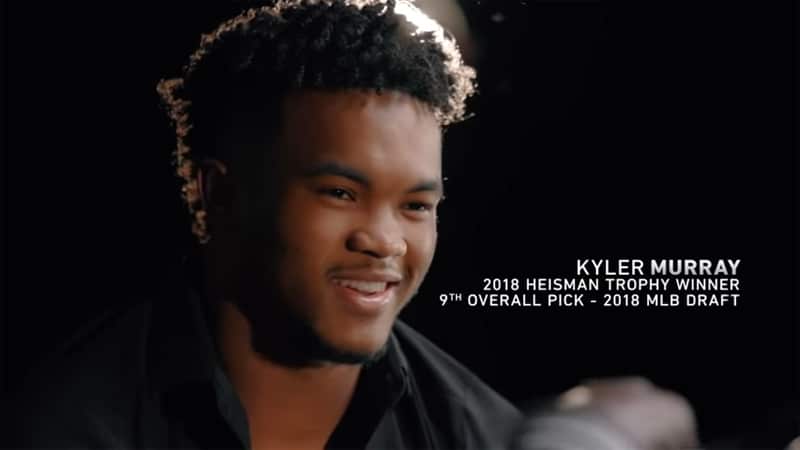 The Kyler Murray draft projection will skyrocket after his huge announcement on Monday morning. The Oklahoma Sooners Heisman Trophy winner just announced he will commit to football full-time.

This comes one year after the Oakland Athletics drafted Murray in the first round of the MLB Draft. The A’s allowed Murray to return to OU to play quarterback for the Sooners and he exceeded all expectations, winning the Heisman Trophy and leading Oklahoma to the College Football Playoffs.

As a result, many wondered if he might want to give the NFL a try.

With only four days left until he was supposed to report to spring training for his first Minor League season of baseball, Murray announced he was going to the NFL.

Why did Kyler Murray choose football?

Most experts believed that Kyler Murray was going to choose baseball, even after he announced he was entering the 2019 NFL Draft.

However, there is a big reason he might have changed his mind. One is that he has a better chance of a high draft position if he said he will focus on the NFL.

However, Murray dismissed this and said that he chose football because it is his true passion.

“Football has been my love and passion my entire life. I was raised to play QB, and I very much look forward to dedicating 100% of myself to being the best QB possible and winning NFL championships.

Murray, who many experts feel is too short (he is 5’11”), said that he has started extensive training for the workouts and interviews at the NFL Combine — which is where his true worth to NFL teams will be decided.

Many experts also claimed Baker Mayfield was too short for the NFL but he ended up a star with the Cleveland Browns and is clearly one of the most exciting young quarterbacks in the NFL. Mayfield stands 6’1″, just two inches taller than Murray.

Baker Mayfield and Kyler Murray are the first back-to-back Heisman Trophy-winning quarterbacks to come from the same team. Murray backed up Baker at OU in 2017.

Not only is Murray a Heisman Trophy-winning quarterback, but he is one of a very small class of elite quarterbacks coming into the NFL this year.

Only Haskins and Murray are possible starters for an NFL team — and both have questions surrounding their skills in a bigger, faster NFL.

What about the Kyler Murray signing bonus?

If you want to know how risky this move is, look at Kyler Murray’s signing bonus in baseball.

The Oakland Athletics made him their first-round draft pick in 2018 — the ninth overall player taken in the MLB Draft. As such a high pick, the A’s gave him a $4.6 million signing bonus.

Last year the A’s gave him $1.5 million of that money and now he will have to return $1.29 million to the Athletics.

Here is some interesting trivia. If Kyler Murray ends up as a first round NFL Draft pick, he will be the only player in history to go in the first round in both the NFL and MLB Drafts.