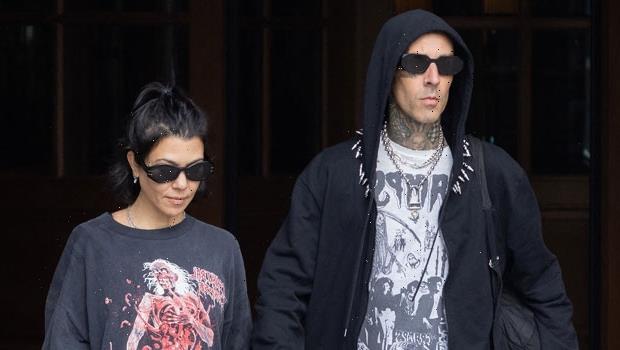 Amid the fallout of Scott Disick’s alleged DMs, Travis Barker shared new PDA photos with love Kourtney Kardashian in the City of Love.

Kourtney Kardashian and Travis Barker are in love in the City of Love — and cannot be bothered by shade about their PDA, merci beaucoup. After some time in Italy, the Poosh founder, 42, and her drummer boyfriend, 45, made their way to neighboring France. The lovefest continued on Friday, Sept. 3 when Travis shared a series of PDA photos with his amour in front of the Eiffel Tower.

“Forever isn’t long enough,” the Blink-182 musician captioned the post. The couple pose (and kiss) in front of the lit-up landmark at night in the first three images, and share another kiss on a carousel in the last. The evening outing comes after the two visited Disneyland Paris and similarly packed on the smooches on some rides at the Parisian amusement park.

Kourtney and Travis arrived in Europe last month to attend Dolce & Gabbana’s three-day fashion event in Italy. While the couple packed on the PDA in Venice, Kourtney’s exes Scott Disick and Younes Bendjima made headlines across the pond: Younes publicly shared Instagram DMs that appeared to have been from Scott on August 31. Per his screenshot, the message read: “Yo is this chick ok!????” Brooo like what is this. In the middle of Italy.”

(HollywoodLife reached out to Scott’s reps to confirm the legitimacy of the messages, but has not heard back.) Younes responded in the DMs, “Doesn’t matter to me as long as she’s happy. PS I ain’t your bro.” He also slammed Scott on his Instagram Story, writing, “Couldn’t miss this one. He’s been playing around for too long, tired (sic) to stay quiet and be the nice guy.”

While Kourtney and Travis have not publicly addressed the alleged DMs, Travis shared an Instagram Story of Ray Liotta’s Goodfellas character laughing hysterically on the day that Younes shared the messages. Some fans have interpreted this as a response. As for Kourtney, sources previously told HL exclusively that while she’s “frustrated,” she “isn’t too surprised” about Scott’s alleged messages.

“She knows he’s had an issue with her relationship with Travis all along,” our source said. “She’s still enjoying her vacation with Travis, but she’s not gonna let that one slide. She has every intention of discussing this with Scott once she gets back home.”