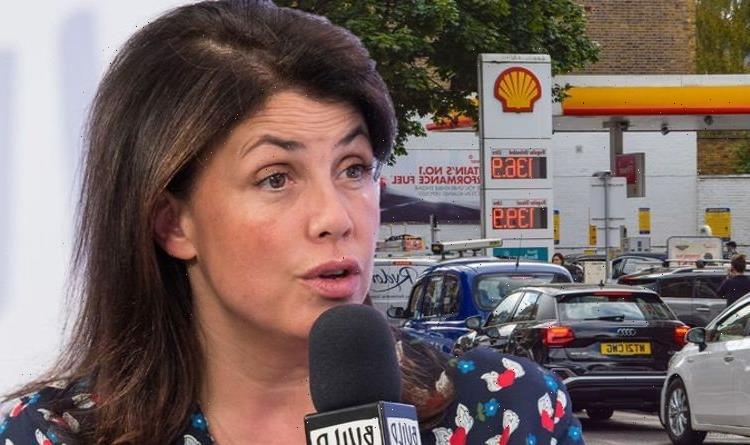 Kirstie Alsopp, 50, has told her Twitter followers about her ordeal, after being stranded in Burford amidst the fuel shortage. The presenter recently told those panic buying to “get a grip”.

Today I have passed 5 petrol stations in London with ZERO fuel.

She tweeted to her 424,800 followers today: “Yesterday I ran out of fuel returning from Buford to London, none available in High Wycombe area, had to leave car as no family member had enough fuel to come and help me.

“Today I have passed 5 petrol stations in London with ZERO fuel. #UKAutumn21.”

Followers were quick to comment to offer advice to Kirstie during the fuel shortage in the South East.

LmdeeleyLorna said: “Are you not in AA, RAC or equivalent who could have helped you out, eventually!”

Kirstie replied: “I didn’t want to bother them, I reckoned there were people in greater need.

“I met a great lad who drove me to London and someone is collecting the car today, whole thing costing a fortune.”

She added: “Those without money to burn are being screwed by this situation.”

Others were quick to tell Kirstie about their struggles over the past two weeks.

Jerry2623 said: “My mate buys and sells cars and has bought a few in the last few days but can’t move them as they have no fuel.

“The knock on affects of this are massive.”(sic)

Magwitch22 offered his opinion on her situation: “Why on earth set off on a journey, at this time of shortage, knowing you haven’t got enough fuel to complete the trip?

Kirstie recently found herself in the middle of a petrol debate when she tweeted her opinion on what was happening on September 24.

She said: “I’m not planning to drive my car until Sunday night.

“I don’t know how much petrol it has in the tank and I don’t intend to check.”

The Channel 4 star then added the hashtags: “#notalemming #getagrip.”

Kirstie’s followers were less than impressed with her response to the situation.

Jimeekay said: “Some people have important commitments this weekend Kirstie.”

Kirstie responded: “I’m sure they do, but that doesn’t mean they should dash to the petrol station if they don’t have an empty tank.”

The outspoken presenter followed up her original tweet, writing: “The average tank will take you 500 miles, is everyone suddenly planning to drive from Cardiff to Dundee?”