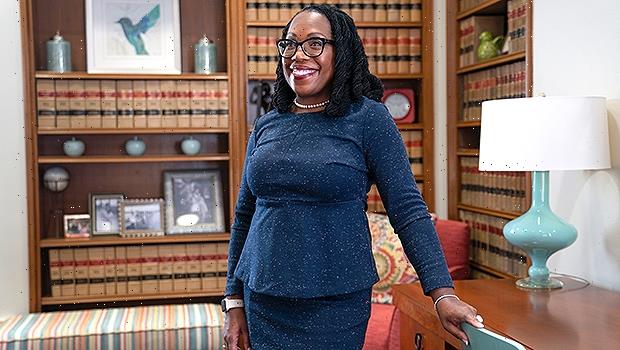 The first official portrait of Ketanji Brown Jackson as a member of the SCOTUS is here. Take a look at the dignified, beautiful photo!

After the 53-47 results of the confirmation vote, Ketanji Brown Jackson is officially a Supreme Court Justice! During her first days in office, Ketanji took her first official portrait, as seen below. The justice stood tall and dignified for the portrait against a charcoal grey backdrop, wearing a chic black blazer jacket and matching pencil skirt.

Ketanji is busy taking photos these days in celebration of her confirmation! The 51-year-old just shared a selfie with President Joe Biden after he was sure to congratulate her for being the first Black woman to ever be confirmed to the Supreme Court on Thursday April 7. The historic occasion was finalized by a vote in the Senate over a month after Jackson was announced as the president’s nomination to fill the seat left open by Supreme Court Justice Stephen Breyer, after he announced his retirement.

“For those who are asking,” the president joked in the caption as he and Ketanji smiled from ear-to-ear, taking in the news of her confirmation.

The president wasn’t the only one to congratulate the newly-appointed justice. First Lady Jill Biden also sent her well wishes to Ketanji on social media with a photo of the two women looking out over Washington, as she shared a special message to her about her place in history. “Judge Jackson, no one will forget the look on your daughter’s face or your husband’s pride throughout your confirmation — your journey will continue to inspire generations to come,” she wrote.

Besides the First Lady, plenty of other stars took to their social media to share their excitement that she was confirmed. Former First Lady Michelle Obama also tweeted that she was incredibly touched to see Jackson receive the historic honor. “I was so moved to see Justice Ketanji Brown Jackson confirmed this afternoon. Like so many of you, I can’t help but feel a sense of pride—a sense of joy—to know that this deserving, accomplished Black woman will be a part of the highest court in the land,” she wrote.