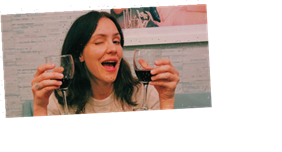 Katharine McPhee is currently living her best life going to fancy dinners with Meghan Markle and chilling out with David Foster and their new bb, but once upon a time she was a mere normal like the rest of us. In case you haven’t been following Katharine’s career since the olden days of 2006, she became famous thanks to Season 5 of American Idol, where she impressed judges so much that she ended up being runner-up.

After coming in second on Idol, Katharine’s self-titled album casually debuted at #2 on the Billboard 200, and she booked a role in House Bunny, and then starred in what was clearly the best-and-not-at-all-worst show of all time, Smash. From there, Katharine signed a record deal with Columbia, iconically played serial killer Robert Durst’s first wife in a Lifetime movie, before moving on to star in Waitress on Broadway! Oh, and now? Now she’s out here in a charming new Netflix show called Country Comfort:

So yeah, Katharine’s been busy. Like, busy making a whole buncha money. Here’s a lil info about her net worth (which yes, is entirely separate from that of her husband David Foster, tyvm!).

Even back in 2011, Katharine was one of the richest American Idol alums–coming in at #10 with $1 million in earnings since her rise to fame in 2006. At the time, Forbes attributed her $$ to her three albums—not to mention all her acting work.

She Has a Buncha Money Tied Up in Real Estate

Katharine has been pretty savvy with her investments, reportedly buying several homes in California over the years—including a $2.05 million place in Studio City, and a $1.4 million home in Toluca Lake, which she’s been known to rent for $6,900 per month.

Most recently, Katharine and David Foster have been house-hunting in Montecito, California, near where their close friends Meghan Markle and Prince Harry live. Back in November, a source told The Daily Mail,

Casual: She Was the Face of Neutrogena

For two entire years! Katharine’s total earnings aren’t available, but a Neutrogena campaign seems like it’d pay well—especially since she landed such a long contract and made gems like this:

Real Quick, Out of Curiosity: What’s David Foster’s Net Worth?

According to Celebrity Net Worth, the 71-year-old musician/record producer is sitting on a bank statement to the tune of $150 million. Good for him!!

So, What Is Katharine McPhee’s Net Worth?

That’d be a cool $14 million. Not too shabby, and she’s worked super hard to get it. And if you’re too lazy to do the math (it’s fine, I get it), Katharine and David’s combined household net worth $164 million.

Unfortunately because, ugh, the internet, Katharine has had to deal with a lot of trolls accusing her of only being with David for his money (ridiculous—she’s literally a millionaire in her own right!). But she has a good sense of humor about it all, and recently responded to someone who wrote “There for the money” on the below photo with “obviously.”

You love to see it.

You can’t get enough of the celebrity $$ deets. Same here! Let’s dive in together.