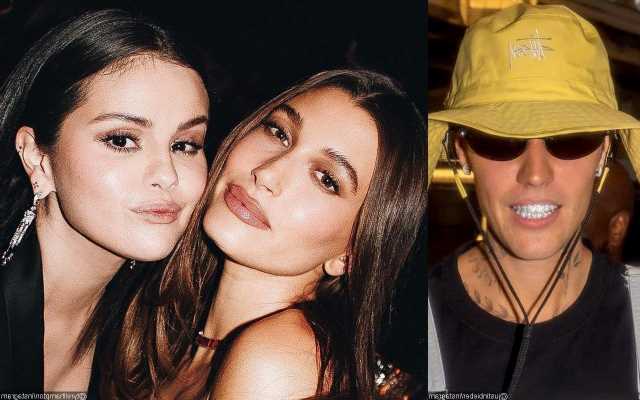 Words are the pop superstar got ‘very emotional’ upon learning of his wife and his ex-girlfriend’s encounter at the Academy Museum of Motion Pictures’ 2nd annual gala.

AceShowbiz –Justin Bieber is apparently grateful for Hailey Baldwin and Selena Gomez‘s surprise encounter at the Academy Museum Gala. If a new report is to be believed, the “Baby” hitmaker is “beyond happy” seeing his wife and his former fling getting along.

On Tuesday, October 18, a source close to the Canadian pop superstar told HollywoodLife.com, “Justin was beyond happy over Selena and Hailey’s encounter at the Academy Museum Gala.” The so-called insider added, “It made him very emotional because of the past that he shares with Selena and how much he wanted this to happen.”

“Justin really cares about Selena’s well-being. This will never change,” the source further explained. The informant also revealed the content of Hailey and Selena’s intimate conversation at the event. “Hailey said that they talked for quite some time and although they did not get into anything too deep, they were able to be real with each other about where they are now,” the insider noted.

Hailey and Selena joined forces at the Academy Museum of Motion Pictures’ 2nd annual gala on Saturday night, October 15 in Los Angeles. When posing for photos, the two looked to be on good terms as they were all smiles.

In one of the snapshots, taken by photographer Tyrell Hampton, the girls have their cheeks pressed together and are both looking stunning in the camera flash. In another image, they can be seen hugging and embracing each other.

The images came just a few weeks after Hailey appeared on the “Call Her Daddy” podcast in late September and spoke about the dynamic between her and Selena. “It’s all respect. It’s all love,” she said.

“That’s also why I feel like, well, if everybody on our side knows what happened and we’re good and we can walk away from it with clarity and respect, then that’s fine! That brought me a lot of peace. We know what happened. It is what it is,” Hailey added, before noting, “You’re never going to be able to correct every narrative.”

Hailey also explained her real relationship timeline as it’s rumored that she “stole” Justin from Selena. “When him [Justin] and I ever started like hooking up or like anything of that sort, he was not ever in a relationship ever, at any point,” the 25-year-old model said. “It’s not my character to mess with someone’s relationship.”

Following the bombshell podcast, Selena appeared to comment on fan’s response to the former love triangle during TikTok Live. The “Only Murders in the Building” star told the viewers, “Some of the things that I don’t even need to be aware of are just vile and disgusting, and it’s not fair, and no one, ever, should be spoken to in the manner that I’ve seen.” She then asked her followers to “be kind.”