Cake isn’t always by the ocean! Joe Jonas, popularizer of putting the beloved dessert in places it would not typically be found, threw an entire sheet cake in a concertgoer’s face just for fun.

The “Cake by the Ocean” singer, 29, tossed the massive pastry at a man who was ready and waiting with his mouth open at the front of the stage. The cake made perfect contact, slamming into his face with extreme precision. 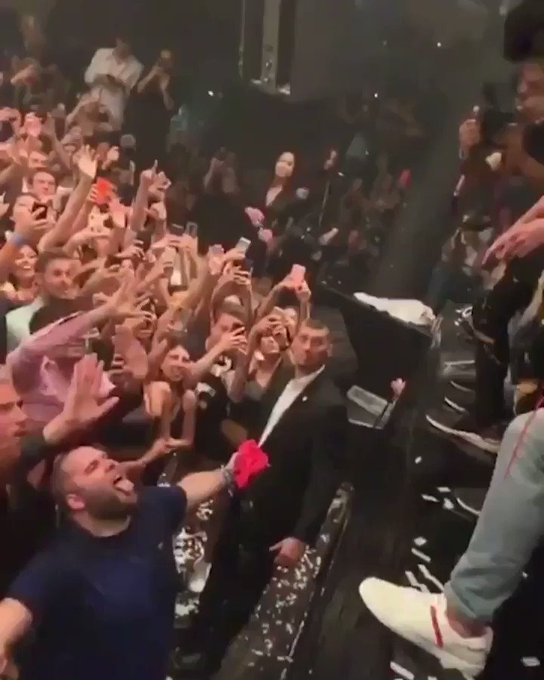 This use may include analytics, personalization, and ads.

thank you @steveaoki for showing me how it’s really done! @DaveGrutman legendary night.

“Thank you @steveaoki for showing me how it’s really done!” Jonas captioned a Twitter video of the incident on Thursday, March 28. “@DaveGrutman legendary night.”

The Jonas Brothers — including Kevin and Nick — have been in Miami with Sophie Turner and Priyanka Chopra Jonas. The recently reunited band were “shooting something” in Florida, the 26-year-old “Jealous” crooner revealed via Twitter on Sunday, March 24. Some speculated that the siblings were filming a new music video.

The group was spotted in beach gear while lounging poolside and cuddling with their significant others. Kevin’s wife, Danielle Jonas, and the couple’s two daughters, Alena, 5, and Valentina, 2, were noticeably absent from the family vacation.

Turner, 23, and Chopra Jonas, 36, later hung out with the brothers during a day off in Miami. The actresses rode Jet Skis and danced along to the band’s highly successful comeback single, “Sucker.”

In addition, the Game of Thrones star and fiancé Joe, who got engaged in October 2017, flirted with each other on Instagram on Wednesday, March 27. “Apparently it’s #JoeDay so here’s my favorite Joe of them all. My Joe,” she captioned a sweet Instagram Story photo of the DNCE member on a yacht.

Joe quickly gave her an equally sentimental shout-out, writing on his Instagram Story: “Checking u out tho.”

Us Weekly reported in November 2018 that the couple are set to wed in France this summer.