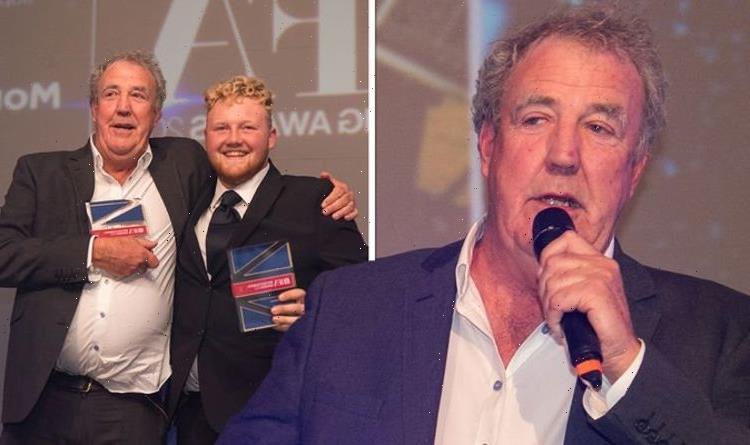 Jeremy Clarkson, 61, has admitted he couldn’t have won an award without fellow farmer Kaleb Cooper at the British Farming Awards. The stars scooped the Flying the Flag for British Agriculture Award at the glitzy ceremony last night.

Hosted by Vernon Kay, the ceremony was attended by 700 farmers who watched Jeremy and Kaleb win the award.

The pair were recognised for raising awareness for British farming as well as bringing it to wider audiences thanks to their show Clarkson’s Farm.

Accepting the award, Jeremy paid tribute to Kaleb who he “couldn’t have done it without”.

The former Top Gear host said: “Kaleb I couldn’t have done this without you, you are the star of the show (apart from Gerald).

“But what was great and I’m sure everyone in the room would say the same thing.

Yesterday, Jeremy’s farm shop Instagram shared a behind the scenes snap of the pair as they headed to the awards.

This saw the pair smiling in the sun before heading to the ceremony.

Alongside it, the caption read: “So important is the night ahead, Kaleb’s been to the hairdressers.”

Congratulations have poured in for Kaleb and Jeremy have they won the award.

“So many people have learned a lot about what farming is like from that show.

“Definitely recommended viewing. Should be compulsary viewing, in my opinion.” (sic)

A third fan named @CrummmySean penned: “They’re flying the flag for agriculture and for farmers everywhere.”

This is the latest in a series of awards Jeremy has won recently.

He also scooped the Farming Champion of the Year gong at the Farmers Weekly awards.

However, Jeremy hit back at someone who suggested it was a “cleverly worded award” on Twitter.

“Been good for farmers without actually being the best #farmer himself.”

Jeremy then replied in view of his 7.5 million followers: “Why do you feel the need to be unpleasant. I’m a s*** farmer. That’s the point.”