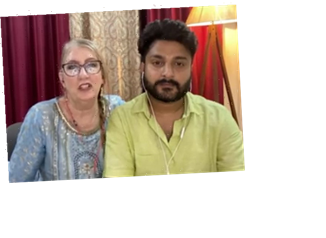 Last year, we reported that Jenny Slatten and Sumit Singh would share more of their story.

90 Day Bares All is designed for just that.

In this clip from the Discover+ exclusive new series, Jenny and Sumit are answering a lot of questions.

Even Sumit’s parents stop by after the pair are asked why they don’t just get married.

Jenny and Sumit helped to launch 90 Day Fiance: The Other Way.

They were on the first season, where production and Jenny were both shocked to learn that Sumit was already married, having been forced into an arranged marriage by his parents years after meeting Jenny.

In Season 2, he was finally granted a divorce … but his controlling parents refused to give him their blessing to marry Jenny because of her age.

As you can see in this footage, host 90 Day Bares All host Shaun Robinson asked Jenny about her much-discussed visa status.

“Every month, a new extension,” Jenny revealed, explaining how she has continued to tread water with her tourist visa in light of the COVID-19 pandemic.

She did warn that if India stops granting extensions, she will “probably have to leave the country.”

Naturally, this prompted Shaun to state the obvious: couldn’t they just get married to eliminate the visa uncertainty?

This is when Sumit’s parents, Anil and Sahna, joined the chat.

While their feelings haven’t changed in terms of the marriage, it does sound like some of their opinions have softened.

“Jenny is a very good lady,” Anil acknowledged, which was a huge departure from their open dislike of her in the past.

But Anil notes that Jenny is only a decade or so away from turning 75.

Their concern is, at its core, about social and cultural appearances and the stigma that they would face as the parents of a son who married the woman he loves instead of one his own age.

They also explained that they are worried about how Jenny will be elderly and that, when Sumit reaches old age, he might have no one to care for him.

There are complicated cultural differences at play here. Still, they are standing in the way of their son’s happiness, which decidedly makes them the bad guys.

Some fans, convinced that Sumit could not possibly be in love with Jenny, think that he is hoping that Jenny’s visa will run out.

This would force her to return to America without him having to break up with her.

Obviously, this theory doesn’t really hold water or make sense … but Jenny having to return to America may be what happens if Sumit doesn’t muster the courage to follow his heart.

So they are still not married, and that promise ring is the only one that Jenny has gotten from Sumit.

It is hard to tell how their story will end. They have both poured nearly a decade into this relationship already.

Neither of them appear prepared to move on, and not just out of time already spent. They really love each other … but only time will tell if that love is enough.