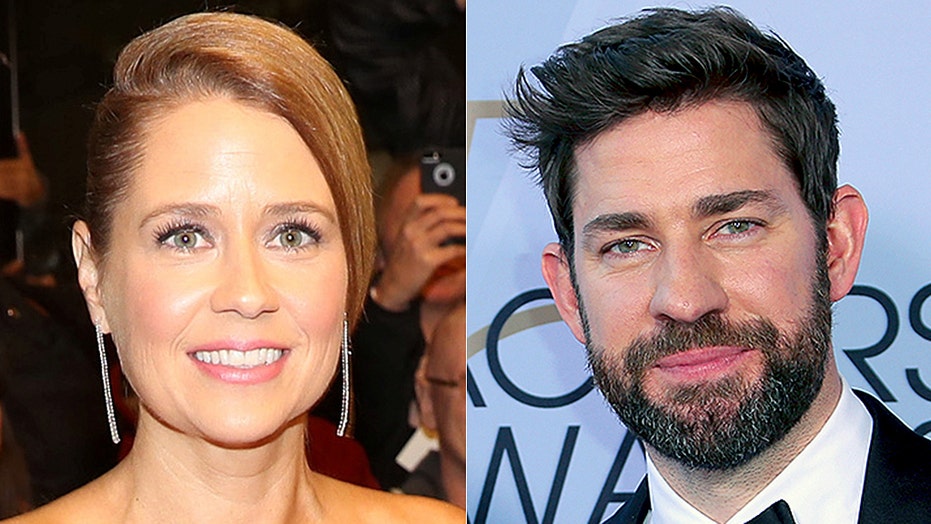 The Blues won their first-ever championship 4-1 after 52 years in the league. Fischer celebrated the win by taunting Krasinski with an Instagram video showing her icing a Blues-themed victory cake.

“John Krasinski, I got my Gloria Cake and I’m going to eat it too!” the 45-year-old said while the Blues’ victory song, Laura Branigan’s “Gloria,” pumped in the background.

Earlier that night, Krasinski posted a video teasing how Fischer couldn’t be there with him at Game 7 before revealing he was with another “Office” co-star, David Denman, who played Roy Anderson, Pam Beesly’s ex-fiancé.

“Just be careful he doesn't leave you at the game,” Fischer responded, referencing Pam and Roy’s relationship on the show.

Fischer, who grew up in St. Louis, said she has sparred with Boston-born Krasinski since their days portraying beloved TV couple Pam Beesly and Jim Halpert on “The Office.”

“Let me tell you something, this feud has been going on for a long time between us,” Fischer said during Sunday’s Game 6. “Because when we were shooting the show, the Red Sox and the Cardinals were in the World Series. And ['The Office' actress] Phyllis [Smith] and I — Phyllis is from St. Louis — we would be in my trailer cheering for the Cardinals. And [Krasinski] had ['Office' actors] B.J. [Novak] and Steve Carell in his trailer cheering for the Red Sox, and they swept us in four games."

“And it is my turn,” the actress continued. “It is my turn to rub it in his face. So let’s go Blues!”