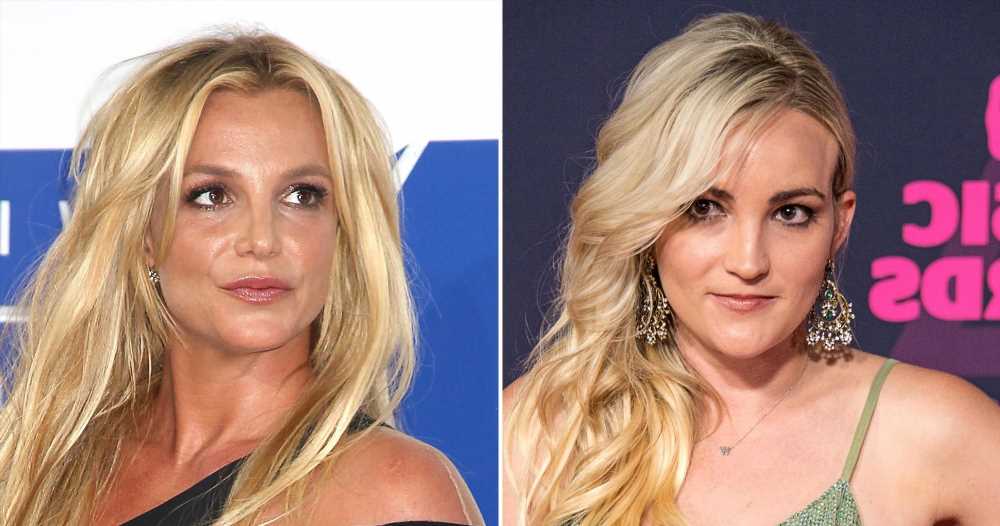 Standing her ground. Jamie Lynn Spears gave trolls a stern talking to after facing backlash for not speaking up sooner amid Britney Spears‘ conservatorship battle.

Britney Spears and Sister Jamie Lynn’s Relationship Through the Years

“Hi, I respect that everyone has the right to express themselves, but can we please stop with the death threats, especially the death threats to children,” the Zoey 101 alum, 30, wrote via an Instagram Story on Friday, July 2, signing the message with her initials, “JLS.”

Jamie Lynn’s post came less than one week after she broke her silence on the legal drama surrounding Britney, 39, who has been locked in a restrictive conservatorship for 13 years. 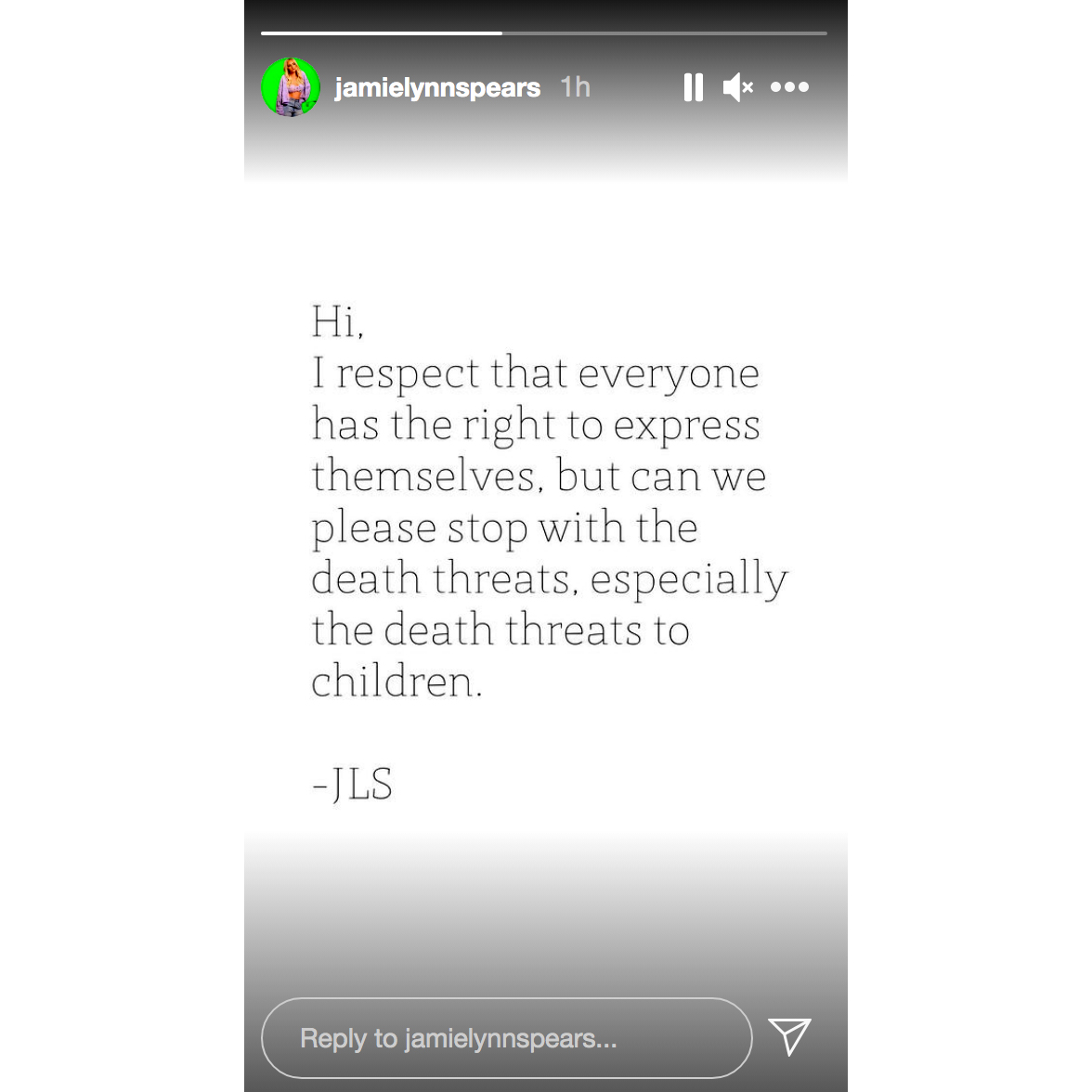 “I think it’s extremely clear that since the day I was born I’ve only loved and adored and supported my sister. I mean, this is my freaking big sister before any of this bulls—t,” the Sweet Magnolias star asserted in an Instagram video on Monday, June 28, five days after Britney publicly addressed her situation in a court hearing. “I don’t care if she wants to run away to the rainforest and have a zillion babies in the middle of nowhere, or if she wants to come back and dominate the world the way she has so many times before. I have nothing to gain or lose either way. This situation does not affect me because I am only her sister who is only concerned about her happiness.”

Jamie Lynn said she’s had the “Toxic” singer’s back “as her sister,” even though fans may not have seen that in the public eye. “Maybe I didn’t support her the way the public would like me to with a hashtag on a public platform, but I can assure you I’ve supported my sister long before there was a hashtag,” she added. “And I’ll support her long after. Note that.”

On June 23, the Crossroads actress spoke out about her conservatorship for the first time, admitting that she “didn’t know” she could “petition the conservatorship to end.” Britney has been unable to make major personal or financial decisions without the approval of her father, Jamie Spears, since her public breakdown and divorce from Kevin Federline in 2007. 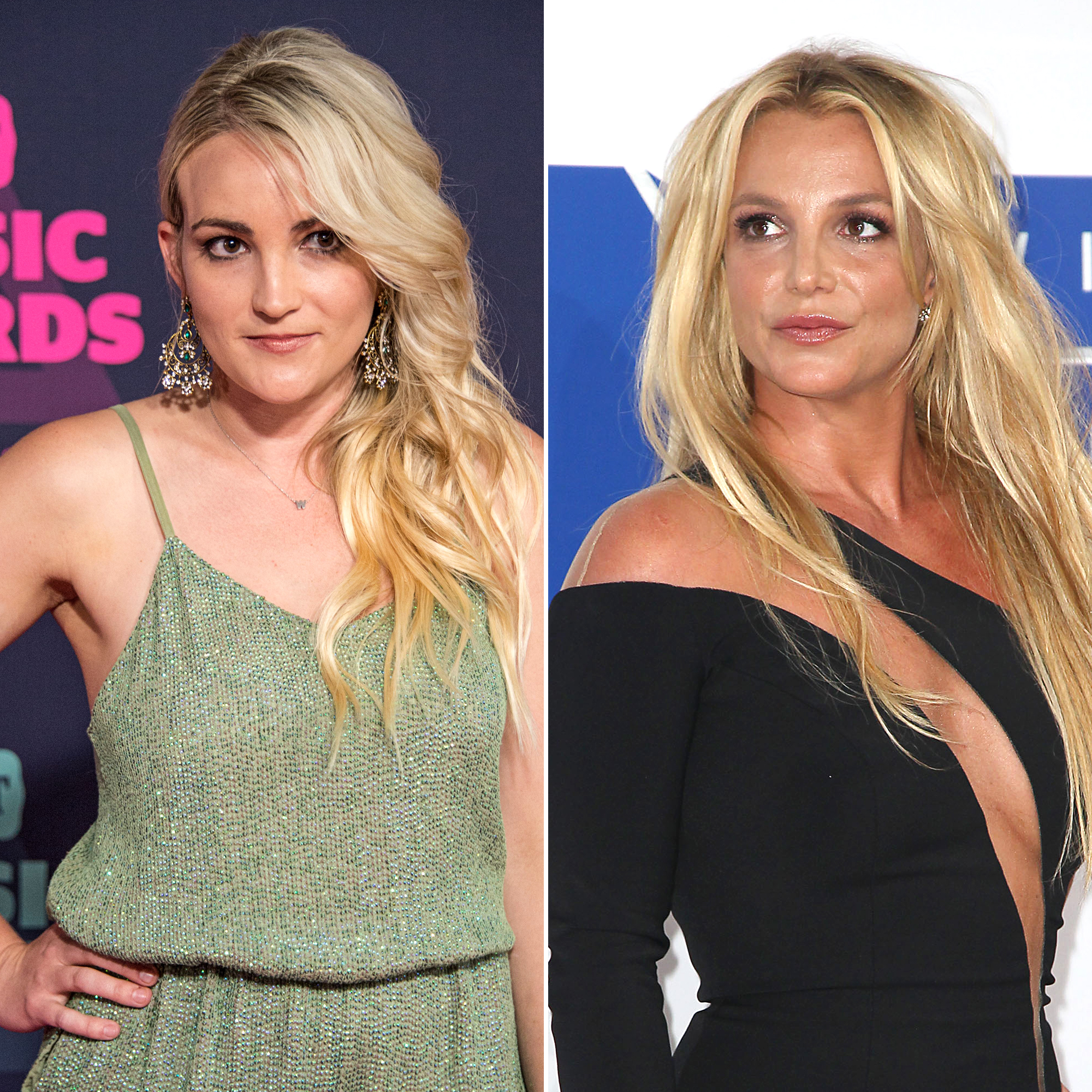 During the emotional hearing, the “One More Time” artist claimed that her father, 68, “loved [having] the control to hurt his own daughter,” adding, “My dad and anyone involved in this conservatorship and my management who played a key role in punishing me — they should be in jail.”

Jamie’s attorney, Vivian Thoreen, later read a statement on his behalf, noting, “He’s sorry to see his daughter suffering in so much pain.”

Fans have been urging the court to step in and help Britney for years — and the “Gimme More” singer is finally ready to take a stand.

“That’s why I’m telling you this again two years later, after I’ve lied and told the whole world ‘I’m OK and I’m happy.’ It’s a lie,” she told the judge. “I thought I just maybe if I said that enough maybe I might become happy, because I’ve been in denial. I’ve been in shock. I am traumatized. You know, fake it till you make it. But now I’m telling you the truth, OK? I’m not happy. I can’t sleep. I’m so angry it’s insane. And I’m depressed. I cry every day.”

Britney Spears’ Ups and Downs With Dad Jamie Over the Years

Jamie Lynn’s husband, Jamie Watson, also expressed his support for the Grammy winner after her powerful statement. On Monday, the All That alum told fans how “proud” she was of her older sister for taking the big step.

“I’m so proud of her for requesting new counsel like I told her to do many years ago,” Jamie Lynn said. “If ending the conservatorship or flying to Mars or whatever else she wants to do [will make her happy] — I support that, 100 percent. Because I support my sister. I love my sister. Always have, always will. As long as she’s happy. Let’s keep praying. That’s all.”