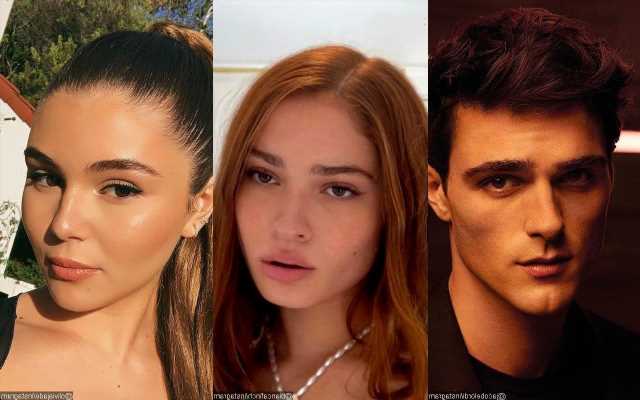 The Nate Jacobs depicter on ‘Euphoria’ is spotted enjoying a sunny romantic park date with the model in Los Angeles after his brief romance with the ‘Dancing with the Stars’ alum post-split from Kaia Gerber.

AceShowbiz –Jacob Elordi has been spotted hanging out with a new female companion. The Nate Jacobs depicter on “Euphoria” has been caught cozying up to model Bianca Finch during a romantic park date, less than three months after enjoying an “easy and fun” relationship with Olivia Jade post-split from Kaia Gerber.

On Sunday, March 20, “The Kissing Booth” star was photographed having fun with Bianca during a day out in Los Angeles. In photos obtained by Daily Mail, the 24-year-old actor could be seen sitting on a blanket next to the model. At one point, he took photos of the redhead beauty on his camera.

For the sunny park date, Jacob dressed casually in a gray T-shirt which he paired with beige-colored trousers. The actor portraying Ricky in “Deep Water” also wore sunglasses. In the meantime, Bianca donned a bright red T-shirt, matching cap and blue jeans. The couple was accompanied by the actor’s golden retriever Layla and another puppy.

Bianca is a model who is currently signed to Next Models Worldwide. The 24-year-old model, who boasts over 174K followers on Instagram, once starred in Benny Blanco and Juice WRLD‘s music video for “Graduation”.

Jacob and Bianca’s outing came less than three months after it’s reported that Jacob and Olivia were “casually dating” following their coffee date in the Los Angeles’ Silver Lake neighborhood in December.

However, a source spilled to PEOPLE at the time that the “Dancing with the Stars” alum’s still in contact with her ex Jackson Guthy. “Olivia is happy, but she and Jackson still talk often,” added the insider, “It wouldn’t be a surprise for anyone to see them get back together.”

Jacob “casually” dated Olivia after he broke up with Kaia. Before Jacob and Kaia’s separation was announced, an article about Jacob gushing over Kaia was released. In it, he said, “She handles herself wonderfully publicly. And I’ve learned so much from her about how to handle it, how to deal with it and just kind of be whatever about it, you know?”

As for Kaia, she’s now in a happy relationship with Austin Butler. Earlier this month, the pair were spotted headed to the airport after checking out of their hotel in New York City. The lovebirds, who were first seen together in December, were spotted keeping a low profile as they wore face masks and sunglasses to cover their faces.