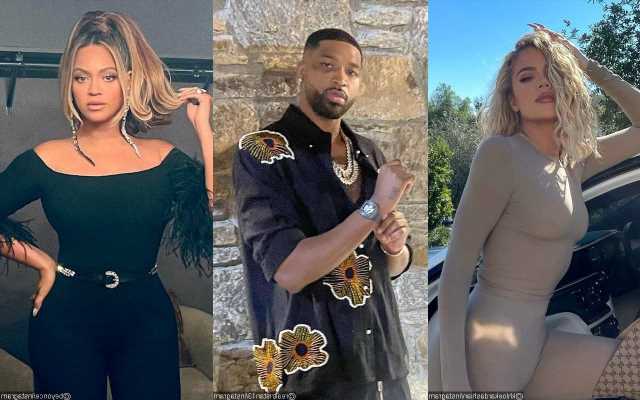 The Good American founder and the NBA star’s awkward run-in at Queen Bey’s disco-themed birthday bash comes after they welcomed their second child via surrogate on August 5.

AceShowbiz –Beyonce Knowles held a lavish party for her 41st birthday which was attended by A-list celebrities. Naturally, there will be times when these stars have an unexpected run-in at the bash. Khloe Kardashian was no exception as her serial cheater ex Tristan Thompson attended the celebration.

On Saturday, September 10, the Good American founder and the NBA player were both in attendance at the “Renaissance” star’s Los Angeles birthday party. While they didn’t arrive together, they were both photographed arriving for the disco-themed affair.

Khloe was glowing as she stepped out of a vehicle before heading into the venue, sporting what appeared to be a sparkling silver gown. “The Kardashians” star continued to embrace the disco aesthetic with her blonde curly hair that was giving serious ’70s vibes.

Meanwhile, Tristan sported a bright yellow tie dye shirt and black pants, leaving the button down slightly undone to show off his chest tattoo and flashy diamond chain necklace. The Canadian-born basketballer completed his ensemble with a pair of black sunglasses.

The SKIMS founder stunned in a figure-hugging black-and-red striped jumpsuit which she paired with black shades. Drake also pulled out all the stops for the bash, showing up in a velvet top and matching pants with stylish shades and diamond earrings.

In the meantime, MGK and his fiancee Megan opted for some sparkle, with the “Bloody Valentine” rocker sporting shiny blue pants and the “Transformers” actress in sky-high silver pumps.

Khloe and Tristan’s awkward run-in came after they welcomed their second child, a son, via surrogate on August 5, months after they split once again due to his alleged infidelity issue. The baby was conceived via surrogate in November last year after the two reconciled following a dramatic scandal with Kylie Jenner‘s BFF Jordyn Woods in 2019, but their latest romantic tryst was brief after the Toronto native once again cheated.

One month after conceiving the baby, court documents revealed that Tristan fathered another child with Texas trainer Maralee Nichols. She gave birth to her child, a son named Theo, in December 2021.