The latest series of I’m A Celebrity… Get Me Out Of Here! has proved to be the most successful yet, garnering the show its highest ratings in its entire history.

A peak audience of 12.1million viewers tuned in to watch Harry Redknapp crowned the King of the Jungle on Sunday night’s finale, capping off weeks of record-breaking numbers for ITV’s 16-year-old ratings juggernaut.

And while viewing figures were cause for celebration, fans of the reality show were in unison in their praise for co-host Holly Willoughby, gushing that she’d ‘breathed new life’ into the series, after stepping in to temporarily replace Ant McPartlin. 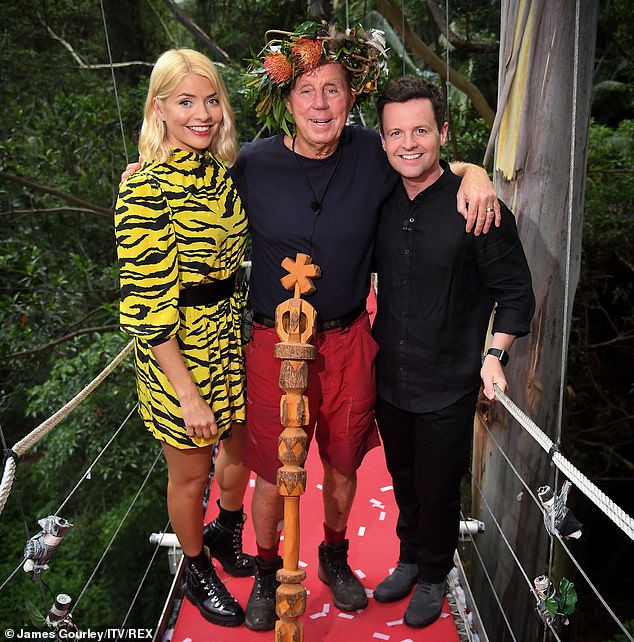 Popular: The latest series of I’m A Celebrity… Get Me Out Of Here! earned its highest ratings ever. Winner Harry Redknapp is flanked by co-hosts Holly Willoughby and Declan Donnelly

Bosses at ITV have revealed that Sunday night’s finale gave the show its highest peak audience of the series, with average viewing numbers of 10.9million — an increase of 1.7million viewers on last year’s final, and the highest rating final since 2013.

Based on seven-day consolidated data, the series averaged 12.2 million viewers, making it the highest rating series in the show’s history.

And Holly enjoyed her own professional achievements on the show, having been praised unanimously for her presenting style as she stepped in to co-host alongside Declan Donnelly while his sidekick Ant dealt with drink and drug addictions. 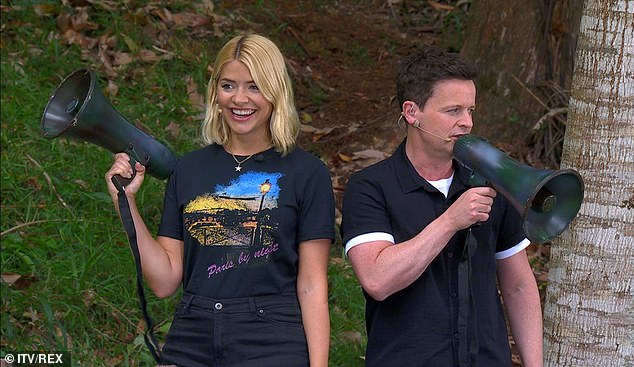 Words of praise: While viewers tuned in in large numbers, they also praised stand-in host Holly

Taking to Twitter, fans shared gushing words about Holly, including one who wrote: ‘Holly you absolutely made I’m A Celebrity this year. Great Chemistry with Dec and a joy to watch. You really breathed new life into a show that was getting tired.’

‘The best #ImACelebrity ever,’ stated another viewer on the micro-blogging site. ‘@hollywills was so good please do it again nest year Holly…’

Penned a third: ‘Well done Holly. You were amazing along with Dec. made me laugh my head off with the trials.’

Amid the glowing praise were calls for Holly to present the show every year — a dream which could well become a reality, as it’s reportedly been proposed that the blonde beauty join Ant and Dec in Australia once they’re finally reunited next year. 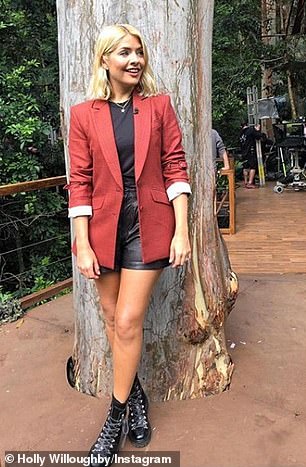 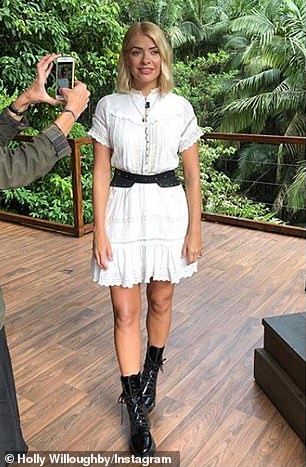 Glamorous: Holly was her usual glamorous self as she stepped before cameras for the show 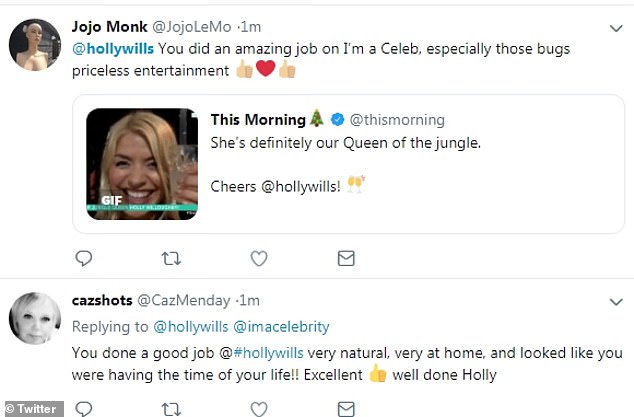 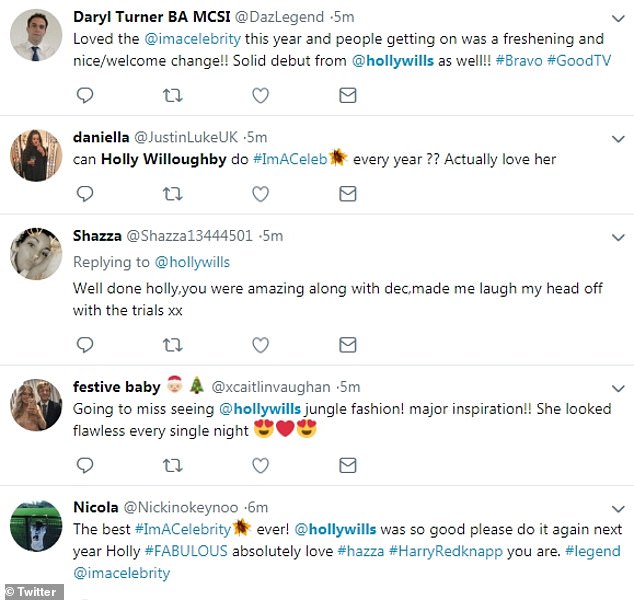 Here to stay? A number of fans also called for Holly to be made a permanent host on the show

I’m A Celebrity also received it’s highest ever viewing figures for a debut, with a whopping 12.6 million tuning in for the first week.

Viewers were pulled in by the new format, with the show managing an impressive 47 per cent share of viewing — the highest consolidated average ever for the series.

The series opener alone this year was watched by just over 14million people, giving the show its highest rating since the third series in 2004.

This year’s series saw the likes of Nick Knowles, Fleur East, Anne Hegerty, Sair Khan, John Barrowman, and Emily Atack battle to be named King or Queen of the Jungle. 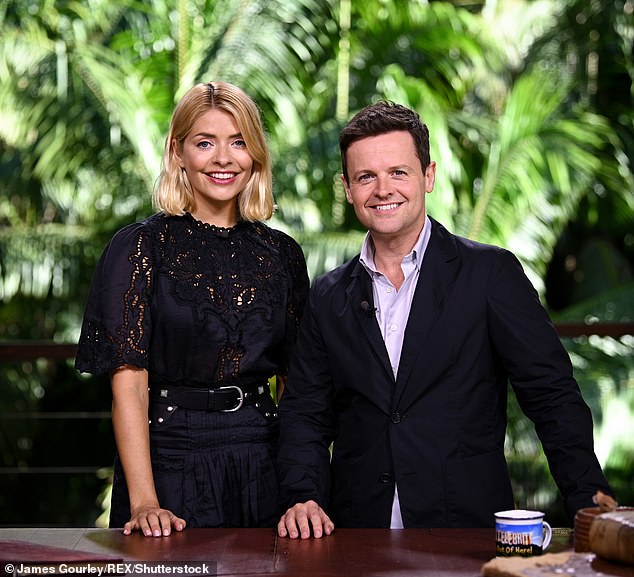 One to watch: I’m A Celebrity received it’s highest debut viewing figures, with a whopping 12.6 million tuning in for the first week as Holly made her debut

In other news, I’m A Celebrity victor Harry Redknapp is said to be the most popular contestant to ever have appeared on the series.

And the football manager’s victory has led to bookies having to shell out in excess of £10million, according to reports.

Harry, 71, had been the standout favourite to win the show from day one, with a flurry of bets being placed since his entry over three weeks ago.

BookmakersTV have revealed that 53 per cent of betting slips saw Harry named as the winner of this series. 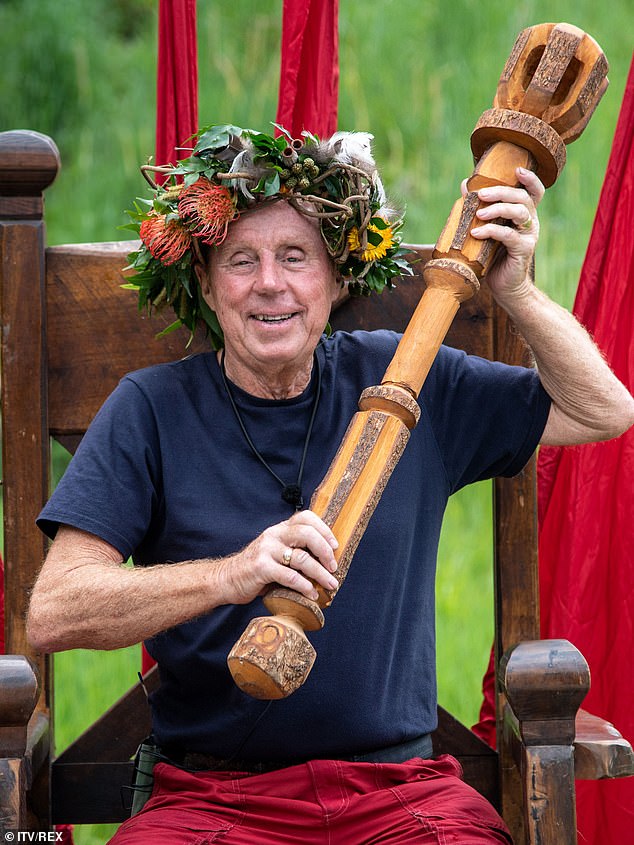 Champ: Winner of I’m A Celebrity Harry Redknapp is said to be the most popular contestant to ever have appeared on the series 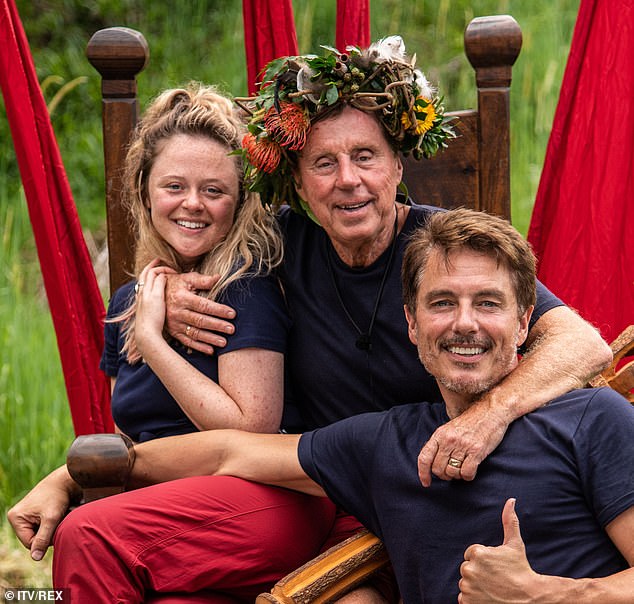 Cost: The football manager’s victory led to bookies having to shell out in excess of £10million, according to reports. Pictured with runner-up Emily Atack and third placed John Barrowman

‘Harry’s supporters will be quids in at the expense of the bookies and not for the first time,’ a spokesperson said.

It’s said that Harry earned £500,000 for his month on the show, and was the second-highest paid contestant after Noel Edmonds is said to have taken home £600,000.

Ironically, Noel entered the show last and was evicted first, making him the shortest-running star in camp this year.

Speaking after his win, Harry said: ‘I’m amazed I survived three weeks to be honest with you. 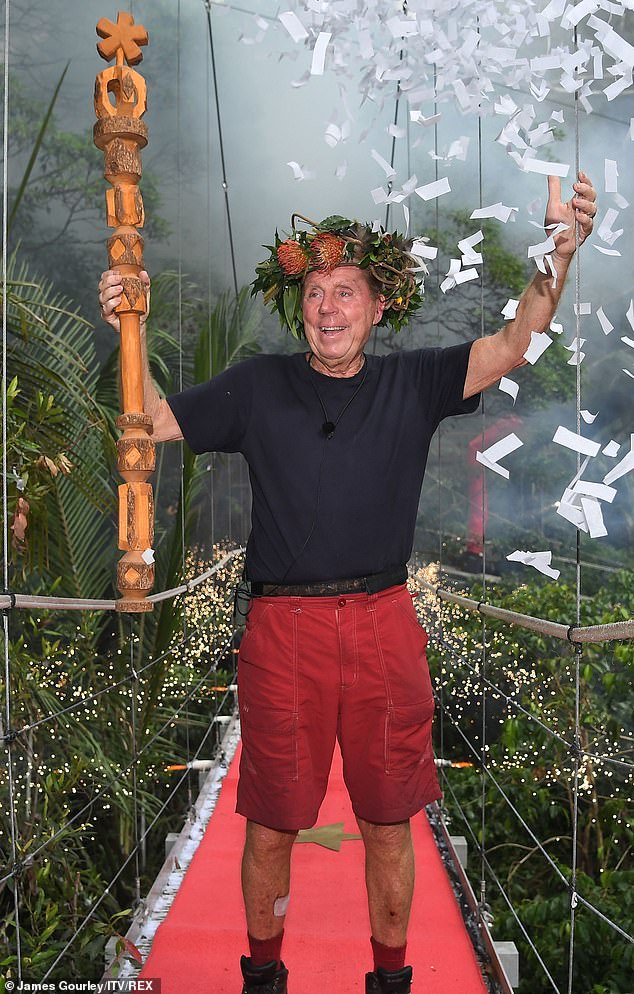 Success: Harry, 71, had been the standout favourite to win the show from day one, with a flurry of bets being placed since his entry over three weeks ago Amazed: Speaking after his win, Harry said, ‘I’m amazed I survived three weeks to be honest with you’. Pictured with wife Sandra following his win

‘I thought it’s going to be a hard couple of weeks but they just dragged me through it, every one of them.

‘They’re the most lovely people I’ve ever met, the whole group. There wasn’t one person I could ever say one single bad word about. They were amazing.

‘Without them, I would never have survived. They really have helped me. They pulled me up hills, they’ve dragged me through the water. They’ve been pushing me; “C’mon Harry get up, you can do it”.’ 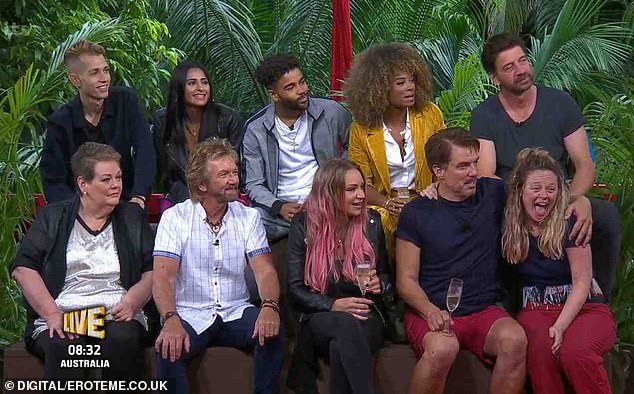 Gathered: The contestants gathered on Sunday night’s finale as Harry was crowned the winner 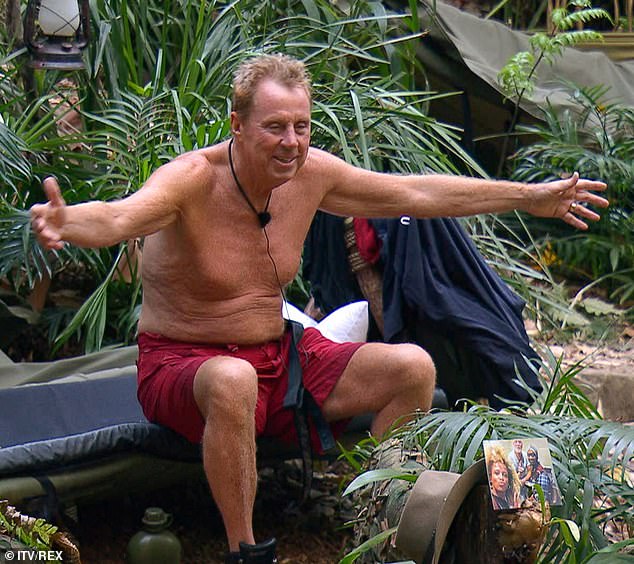 King: Well before the 18th series finished on Sunday, Harry was the odd’s on favourite to win