Iggy Azalea will be celebrating her very first Thanksgiving as a new mom to her precious infant, Onyx, as the mother-son duo was spotted departing LA before the festive holiday.

Iggy Azalea and her son Onyx, 7 mos., were spotted at the LAX airport on Nov. 25. The 30-year-old rapper had her adorable baby dressed for the cold weather in light grey sweats with a matching bib and little white hat. A travel companion was carrying Onyx and shielded the precious tot with a white blanket over his head while helping escort the Australian beauty throughout the terminal. While it’s not currently known where Iggy and Onyx are heading, the “Fancy” singer is based out of Atlanta, Georgia.

The single mom, who revealed on Oct. 23 that she’s raising her son “alone” after splitting with his father, rapper Playboi Carti, wore a black face mask over her mouth and nose while keeping close behind her baby. Iggy dressed for the occasion in cozy grey sweats and wore her signature blonde hair down, styled stick straight with a pair of slightly tinted black sunglasses above her head. 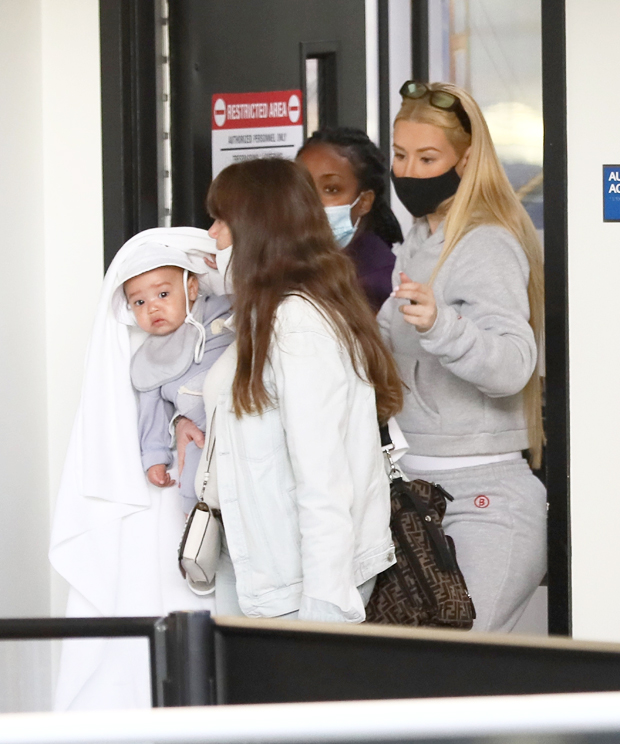 Iggy secretly welcomed Onyx this past summer and confirmed her son’s birth in June. But it wasn’t until July 14 that she revealed his name, along with the sound of his precious voice in an audio video on social media. On Sept. 19, the rapper unintentionally showed her son’s face while arriving at LAX airport and on Oct. 24, Iggy officially debuted Onyx via Instagram with her 14.1 million followers.

Iggy’s getaway comes shortly after she took to Twitter to clear up speculation that Playboi was subtweeting her on Nov. 23. The rumor mill started after Playboi posted a cryptic tweet about telling, “da bit shut up! My son crying.”

Iggy quickly tweeted in response on her own page. “Why I gotta log on and see my name dragged in dirt over a random cryptic a** tweet,” she replied before ultimately shutting down the chatter. “I just spoke to my sons father and apparently that isn’t meant to be about me. Apparently.”