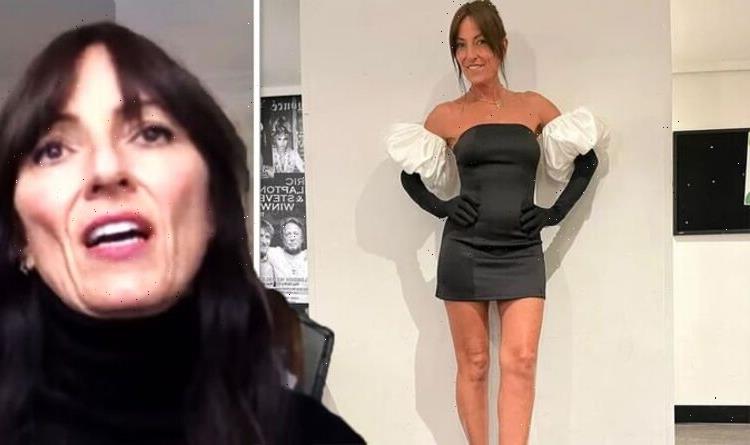 Davina McCall shows off new hair for The Masked Dancer

Presenter and talent show judge Davina McCall claims she is ready to stop “giving a damn” now that she’s in her 50s. The star faced social media backlash last year for some of her outfit choices when she appeared as a judge on The Masked Singer. But in an unearthed interview from December, the TV host spoke candidly about embracing who she is.

On the subject of embracing her 50s, she told the publication: “It’s a time of liberation. It’s a time of shedding the shackles of inhibition and of giving a damn…

“It’s that I don’t really care what people think, which is very liberating,” she continued.

“When we’re left to our own devices, we are very bloody funny.”

When asked about her own emotional health, she added: “I have no drama…no stress. I’m just in a really good, happy, balanced state. Sometimes I feel a bit guilty…but I’ve got nothing to complain about.”

Earlier this year, Davina was forced to defend her outfits after some fans of The Masked Singer kicked up a fuss on social media.

Davina’s care-free attitude seems to have served her well in this regard, as the celeb was able to confidently insist that her fashion choices simply weren’t “that shocking”.

One garment that seemed to divide fans online was a low-cut white dress with a thigh-high slit.

Another that seemed to spark some controversy was a long, semi-translucent black frock.

Davina defended her clothes in an interview with The Sun, suggesting that some people really will “complain about anything”.

She said: “I have a line where I think, ‘I wouldn’t wear that, that’s too risky, or I don’t feel comfortable in it’.

“I just don’t think any of the outfits that I was wearing were that shocking. I didn’t think they were outrageous…”

She continued: “There’s always going to be a few people that complain about anything, about everything.

“Social media is so brilliant in so many ways, but it can be so destructive too.”

The star also gave fellow ITV talent show judge Amanda Holden as an example of someone who divides fans with her bold fashion choices.

Speaking about the Britain’s Got Talent judge she said: “I’m sure it is the same with Amanda because she looks smoking hot, bloody amazing. I always think that it’s good to kind of try to be an example…”

Davina has been a judge on The Masked Singer since 2020 and before that, she was best known for Channel 4’s reality show Big Brother between 2000 and 2010.

Read the full Davina McCall interview in the Jan/Feb issue of Women’s Health UK on sale from 30th December.