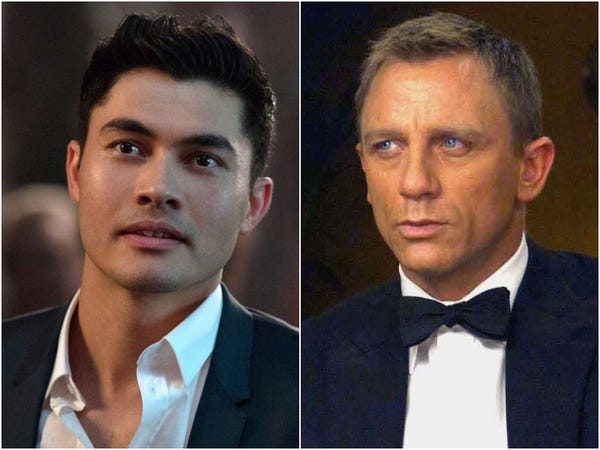 With Daniel Craig taking his final bow as 007 in November's "No Time to Die," the age-old question of who should be the next James Bond has reared its head again.

While reports have suggested Tom Hardy has been cast in the role, nothing has been confirmed, and until we get an official announcement anything could happen. After all, Clive Owen was strongly rumoured for the tux and martini only to never actually be offered the role.

Hardy, Tom Hiddleston, Henry Cavill, and Idris Elba are all names that have been tossed around in connection with Bond. While they'd all surely do a great job, the right choice for the next 007 is Henry Golding.

"Crazy Rich Asians" was one of the biggest successes of 2018, pulling in $238.5 million worldwide and earning a 91% rating on Rotten Tomatoes. The film follows Rachel Chu (Constance Wu) as she flies to Singapore to meet her boyfriend Nick Young (Golding)'s family, who turn out to be incredibly famous and wealthy.

As rich Nick, Golding is the essence of gentlemanly charm every moment he's on-screen. Decked out in the finest clothes in the fanciest places, he looks the part — he'd fit right in at one of the swanky casinos featured in Bond. He also displays that quintessential British charm and refinement needed to make lines like "shaken, not stirred" sing.

In fact, the scene where Golding's Nick wears a white suit to greet Rachel in front of his outrageous mansion plays out like the most expensive audition for James Bond the world has ever seen.

His accent oozes the sort of suaveness Pierce Brosnan's Bond was famous for, while you thoroughly believe that slick Nick is the most sought-after man in all of Singapore.

Women swoon over him, and if he wasn't in a committed relationship with Rachel, you could see him as the smooth ladies man James Bond is known for being. He's cool, sophisticated, debonair, and an absolute catch.

The thing that sets him apart, though, is that he's romantic, which could be a good move for the next incarnation of Bond — Golding could offer a more sensitive, respectful character, since the way the secret agent treats women is increasingly under the spotlight.

He showed he can be rough and tough in 'The Gentlemen'

While the ability to don a nice suit and ask for a Martini is important, Bond gets his hands dirty, too. Daniel Craig was a departure from the uber-suave Brosnan, and was seen as more of a rough and ready Bond as soon as he made his debut with 2006's "Casino Royale."

It's crucial for an audience to believe that Bond could hold his own in any fistfight, or chase scene, or shoot out, and Craig had that in spades.

Golding has that, too, thanks to his role in Guy Ritchie's "The Gentlemen" as Dry Eye. In fact, Hugh Grant's character (Fletcher) even refers to Dry Eye as James Bond.

As the gangster, he's involved in fights, scraps, and more than one scene of a savage nature, proving that he can marry the physical and suave sides of Bond, like Craig's Bond did in the "Skyfall" casino scene:

He demonstrates his acting skills in 'Monsoon'

Golding's filmography may be notably shorter than his competitors, but it is still filled with high-quality movies displaying his fine acting talent — none more so than his upcoming drama "Monsoon."

In Hong Khaou's "Monsoon," Golding plays a gay Vietnamese man who returns to his home country for the first time in over 30 years to scatter his parents' ashes. All about what goes unsaid, the movie is powerful and moving in its restrained silence, which is exemplified by Golding's understated, thoughtful performance where all of his emotions are tightly simmering beneath his stoic veneer.

This is pretty perfect for Bond, who isn't exactly the most demonstrative of characters, but still requires an actor to be intelligent and thoughtful enough to give a layered performance full of depth and class.

He's the right age to bring longevity to the role

While Idris Elba is many fans' number one choice for Bond, his age does work against him. At 48, Elba would be the oldest actor to be cast as Bond. While Roger Moore was 45 when he was cast, and went on to star as Bond until he was 57, the average age of new actors cast as James Bond is 38 and a half.

Hardy is 43, Hiddleston is 39, and Cavill is 37, making all of them slightly more favorable than Elba. Golding is the youngest at 33, which could be a clever choice for producers.

He'd be the third youngest Bond ever after George Lazenby (30) and Sean Connery (32). This could offer a change of pace for the franchise — Golding could play a younger, brasher, more modern-day Bond than Craig, who is depicted as ageing and out of touch with the new world in recent Bond movies.

Golding's casting would also offer longevity to the role. The option to star in four, five, or six Bond movies would be there with Golding, something that may not be possible with an older actor.

Golding's lack of franchise experience could actually help him

Golding is lacking in experience compared to other rumored candidates. Elba has the most seniority of any potential Bond, while Hardy, Hiddleston, and Cavill have all starred in huge tent-pole franchises and know how to carry that weight.

While Golding hasn't been part of a franchise, neither had Brosnan or Craig before they were cast. The producers may actually like that he isn't already attached to another character in the same way that Hardy and Hiddleston are and Cavill and Elba have been. He would come completely free of any potential baggage this may bring, and would solely be the new face of the Bond franchise.

Golding proved he can handle being the leading man in a big movie with his starring role in "Crazy Rich Asians," and being appointed the new Bond could turn him into the international superstar he seems destined to become.