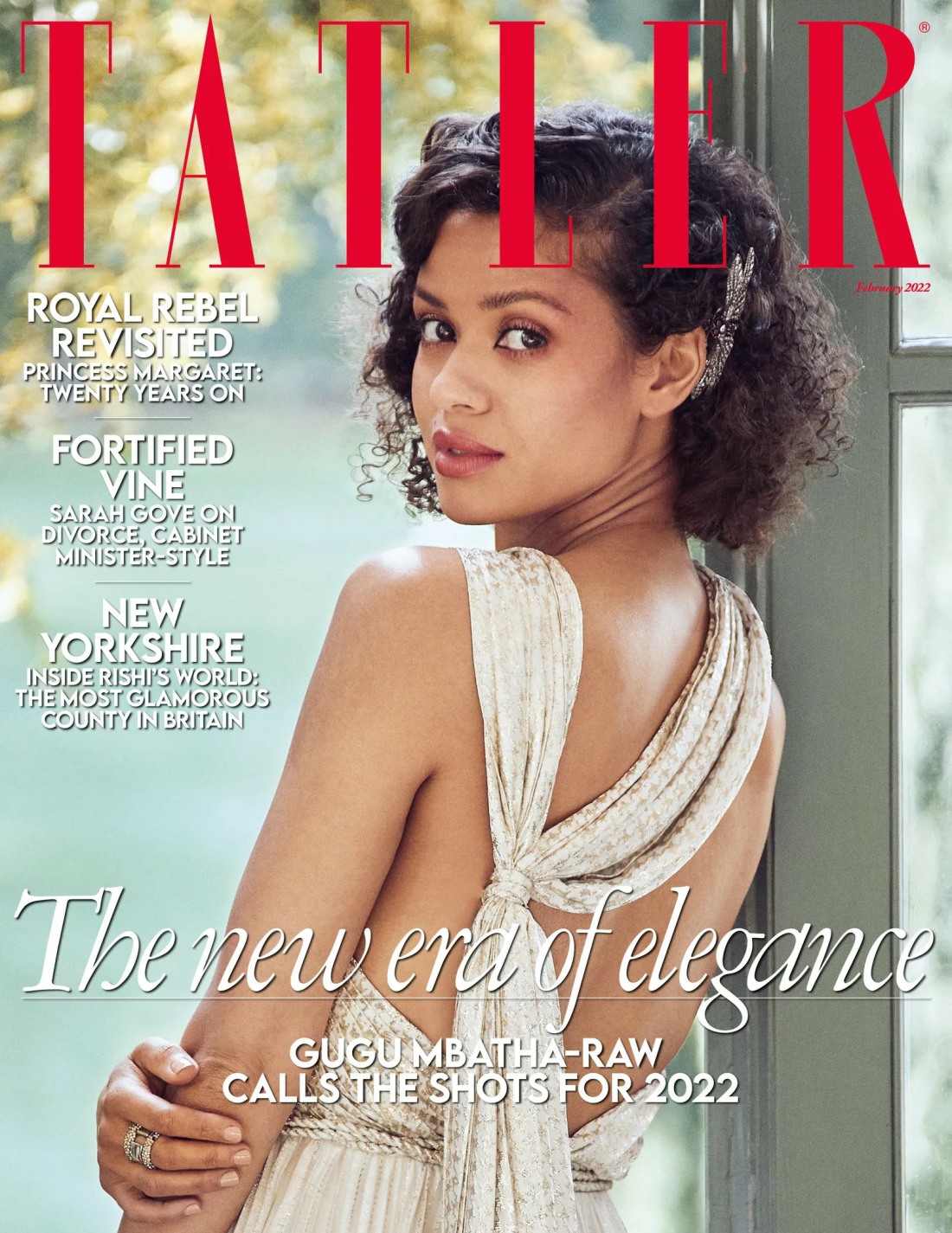 Gugu Mbatha-Raw covers the February issue of Tatler, mostly to promote her BBC One series, The Girl Before. Gugu has a million projects out right now, or coming up. She’s been working a lot, and most of the work is coming to her in America. She lived in LA for several years as she worked on The Morning Show, and I think she was stuck in America for much of the pandemic. Which explains why she recently bought a place in London and why she sounds somewhat homesick in this interview, which took place in San Francisco as she worked on an AppleTV+ series. You can read the full piece here – she talks about the cultural differences between Brits and Americans, and whether she would play the Duchess of Sussex in The Crown.

Complaining about how Americans serve tea: ‘You get hot water and a teabag on the side and they haven’t even taken it out of the wrapping.’

Buying a place in the UK: ‘I was [thinking], “When am I going to see my parents again?” I remember when my mum couldn’t get an Ocado order. I said, “I can do it because I’m in LA. I can be online at three in the morning [UK time]. I can get you a slot and make sure there’s loo paper.” That was a mad, mad time.’

Oprah called her after seeing her in ‘Belle’: ‘I was doing Oprah and Deepak Chopra’s 21-day meditation experience and it was around the end of that time that I got a call from her. I didn’t answer it because I didn’t recognise the number. And then I played the voicemail: it was like, “Hi, it’s Oprah.” It was that voice, so iconic, that I’d been listening to every day and I thought, “This is so surreal.” A lot of these meditations are focused on manifesting your best life and I thought, “Whoa, have I just manifested Oprah on my voicemail? This meditation is powerful stuff!” I feel like she’s always there if I need to reach out. It’s not like we’re close buddies but I respect her so much.’

The most important quality for an actor is persistence: “It’s not like I was plucked out of drama school to be in anything hugely starry or high-profile. I’ve always worked hard and there are a lot of things I haven’t gotten. I’ve got close to lots of big things… I learnt early on that your talent is really not enough. You have to cultivate resilience and be able to bounce back from disappointment. You can’t be too fragile. I think you have to have access to your sensitive faculties, but you also have to know how to coach yourself along and give yourself a talking to and pick yourself up when you need to…’

Americans are charmed by the Royal Family: ‘It sort of feels like a fairytale from an American viewpoint.’ She is supportive, too: ‘I’m sure it’s not an easy life. And I’m sure we don’t know the half of it. But I respect it.’ And although she has never come across Prince Harry and Meghan in Los Angeles, she feels sympathetic towards them: ‘I wish them luck. It’s a tricky transition to make.’

On the suggestion that she could play Meghan on The Crown: ‘Oh my God, that’s hilarious,’ she says, sounding genuinely surprised. How would she feel if she were offered the role? ‘I’d be very flattered; I’d have to consider it.’

She has a sunny disposition: ‘It’s very un-British, isn’t it? People are suspicious of it. They’re like, “Hang on here. Wait a minute. Where’s the problem?” I do think happiness is a choice, to a degree. I think I’ve probably always been a naturally outgoing kind of open person. I’m always looking for an adventure and I think choosing to enjoy things makes life more fun.’

She doesn’t want her private life to make headlines: ‘I live very normally, I don’t hide away. I think it’s quite possible to have a personal private life. I understand the curiosity but I think it’s always healthy to have boundaries. As an actor, I feel like the work speaks for itself and it’s nice to be able to allow people to go on a journey with the character – without feeling like you need to know every single detail about that person’s life.’

She loves food: ‘More than anything, I eat for fuel. I’m not vegetarian or vegan. I have quite adventurous tastes when I’m not working. I love to try foods that I haven’t eaten… And dessert always! I love a chocolate dessert or a tiramisu.’

First of all, I hope it’s clear that she didn’t bring up the Meghan thing, and Tatler makes a point of saying that Peter Morgan won’t extend The Crown into the Sussex era, so it’s just a moot point. All that being said, why on earth would they hire a British actress to play an American actress who married into the Windsor clan? That would make no sense. Gugu also mentions that she was awarded the MBE, and Prince Charles was the one to give it to her. She describes the experience as very meaningful, and she got to bring her family to the ceremony. Love what she says about Oprah too – just goes to show you, all of that sh-t about “British people don’t know who Oprah is” was just racism and performance.