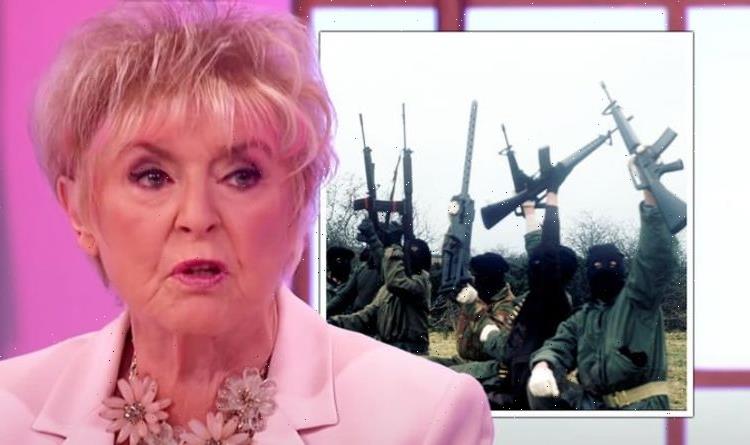 I'm a Celeb: Gloria Hunniford says she was asked to do show

Gloria has become a mainstay of television. She began her career at the ripe age of seven as a singer. As the years went on, her face began creeping onto screens.

Kickstarting her broadcasting life in her native Northern Ireland, she became a regular feature on shows like Good Evening Ulster and Sunday, Sunday.

More recently, Gloria has starred on Loose Women, This Morning, Rip Off Britain, Home Away From Home and Food: Truth Or Scare.

An illustrious life, Gloria’s hasn’t been without drama.

As a young woman, The Troubles kicked off in Northern Ireland, and would deeply affect her career.

In her 2017 autobiography, ‘My Life by Gloria Hunniford’, Gloria detailed a catalogued of dangerous points in her life, not least being put on the IRA’s “death list”.

At one point, she found herself in Germany recording messages from families of British soldiers serving in Northern Ireland for her radio show Ulster Calling on the British Forces Broadcasting Service.

Ahead of flying home, a senior Army commander informed her she and her co-presenter were on an IRA “death list”.

JUST IN: John Whaite explains why he has ‘no attraction’ to Strictly’s Johannes

Speaking to the Mirror ahead of the book’s release, she said: “I was stunned.

“Then the brigadier said: ‘We quite understand if you want to stop doing the programme – we don’t want you to be in danger.’

“I’d got three young kids who needed both their parents. But we’d been doing the programme for the British Forces Broadcasting Service since 1969 and any ‘damage’ had already been done.

“So we both shrugged and said ‘What’s the point in stopping now?’

“It was still shocking to hear your name was on a terrorist hit list, but I was determined to carry on. If you let the fear get to you, life would close down. You can’t let terrorists win.

“ Army security came to my house and told me ‘You MUST keep these curtains shut.’

“Then I was taught how to check for trip bombs under the car before getting in. So I did all that – for about two weeks. Then I forgot and got on with my life.

“It was strange, the Troubles became a way of life, yet you still lived with so much high emotion and loss.”

She also recalled the moment she came close to death when a bomb went off at the BBC radio studio where she worked.

She said: “As I was going on air we were warned a car bomb was set to go off in minutes. The building was evacuated but three of us doing the show decided to stay as the building was so solid.

“The blast erupted and the building shook like jelly and dust poured out of the walls. I couldn’t see across the room. But we were alive so I just told the listeners what was happening.

“It is incredible to think what we got used to. You suppressed your feelings – you couldn’t let it affect you.”

Another instance saw her deeply shaken after being sent a death threat.

It came in 1982, shortly after the launch of her own Radio 2 show launch — what should have been a reason to celebrate.

At the time, however, two bombs had ripped through Hyde Park and Regent’s Park, killing 11 soldiers and seven horses.

Gloria explained: “I was live on air and we were linking to hourly news bulletins but then I’d carry on playing music, which felt odd. Unbeknown to me, threats were coming in saying ‘Get that Irish b**ch off the air or we will.’

“When I finished the show I realised the control room was full of very serious-looking men in suits. They said an extremely serious threat had been made against me.

“I had to be smuggled out of a back door and taken home by car. I was very shaken up as I’d only recently moved to London. From then on I was allowed to drive right up to the back of the building and park out of sight.”

Regardless of the dangers in her job, she stuck at it through the years.

She said she “still has the same passion and drive for work,” feeling as though she had had “at least nine lives”.

Blankety Blank airs on BBC One at 9pm.