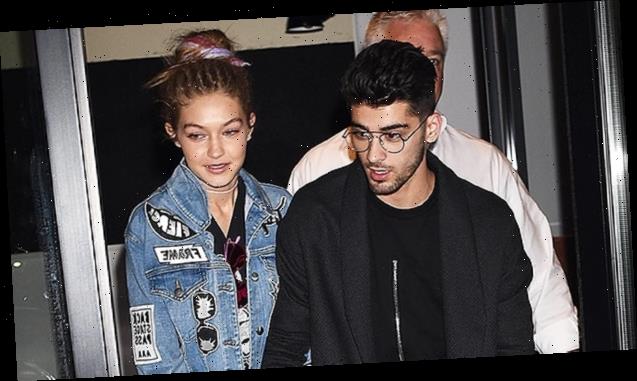 Gigi Hadid confirmed she named her daughter Khai via Instagram on Jan. 21! Shortly after, fans noticed Zayn also had an Arabic tattoo of the name.

Gigi Hadid, 25, is honoring her baby girl in a very special way! The Maybelline model showed off a new, small tattoo of Khai’s name in a makeup tutorial video for Vogue magazine on Thursday, Feb. 4. Eagle eyed fans spotted the fresh ink on her bicep when Gigi lifted her arm to blend her foundation. The tattoo, which is in Arabic, appears to match boyfriend Zayn Malik‘s!

The daughter of Yolanda Hadid and Mohamed Hadid welcomed her first child in September 2020. “Our girl joined us earth-side this weekend and she’s already changed our world. So in love,” Gigi wrote on Sept. 23, sharing a sweet black-and-white photo of her and Zayn holding the newborn’s hand. Zayn, 27, added, “Our baby girl is here, healthy & beautiful. to try put into words how i am feeling right now would be an impossible task.”

The former One Direction member also included a similar photo to Gigi, but from a different angle. “The love i feel for this tiny human is beyond my understanding.Grateful to know her, proud to call her mine, & thankful for the life we will have together x,” he signed off. The couple kept their daughter’s name quiet until Gigi made a subtle announcement on Jan. 21: the model changed her Instagram bio to include that she was now “Khai’s mom.” How sweet!

While Gigi and Zayn have yet to share a photo of Khai’s face, the baby has popped up in glimpses shared to her mama’s Instagram. The Stuart Weitzman model has shared some adorable photos of her and Khai out for a walk, enjoying Thanksgiving, and even in the snow! The New Yorker has bundled up in several chic outfits in recent weeks for some cool strolls with her new trusty sidekick. “her first snow,” the Vogue cover girl captioned one post from Dec. 17.

Although the model confirmed her pregnancy to Jimmy Fallon back in April, she kept posts of her baby bump to a minimum! She finally revealed her growing belly in August via Instagram live, just weeks before she gave birth. In another beautiful black-and-white photo, Gigi posted outdoors as she revealed her then pregnant physique in a throwback pic from the summer. “August, waiting for our girl,” she wrote.