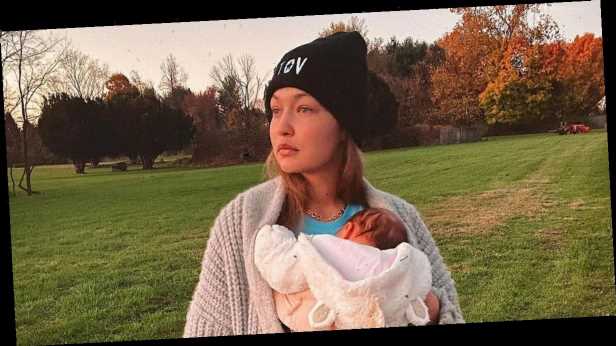 Gigi Hadid has shared an adorable snap of her daughter gripping her finger three months after giving birth.

The 25 year old, who recently teased fans with a picture of her little girl in a Gucci Christmas outfit, took to her Instagram feed to post the photo for her 62.3million followers to see.

The picture shows the new mum holding her pink finger out as her baby, who is wearing a gorgeous brown and black leopard print long-sleeved top, holds onto it with her own pinky.

With over 3million likes, thousands flocked to the comment section to gush over the mother-daughter duo as one person wrote: "Sis don’t make me cry".

Another fan said: "her little fingers," [sic] with a cat heart eyes emoji, while a third added: "AWWWW STOP".

Gigi and the father of her child, former One Direction star Zayn Malik, have stayed tight-lipped about their daughter’s name, but fans now think they may have sussed it out.

After the model's pal Taylor Swift announced her new album Evermore, eagle-eyed followers came up with an interesting theory about the baby’s moniker – suggesting the newborn could be called Dorothea.

Last month, Gigi who gave fans a glimpse of her daughter's nursery, posted a string of throwback snaps of her bump on Instagram. She wrote alongside: “August, waiting for our girl.”

One tweeted: “Y’all hear me out. My bestfriend just cracked something I guess. “August” is track 8 on folklore and gigi has posted a picture on Instagram captioning “August, waiting for our girl” and the track 8 of evermore is dorothea. SO WHAT IF GIGI’S BABY NAME IS DOROTHEA?” [sic]

Another came up with the same theory, saying: “So Gigi Hadid posted a picture a few days ago with the caption “august, waiting for our girl.” And August is the 8 th track on folklore and the 8 th track on evermore is dorothea.” [sic]

A third wrote: “Gigi Hadid’s baby is named Dorothea and you can’t convince me otherwise.”

Taylor, 30, had previously gifted the newborn with a handmade pink blanket.

Sharing a snap on Instagram Stories, Gigi wrote: "Auntie Taylor Swift made this!!"