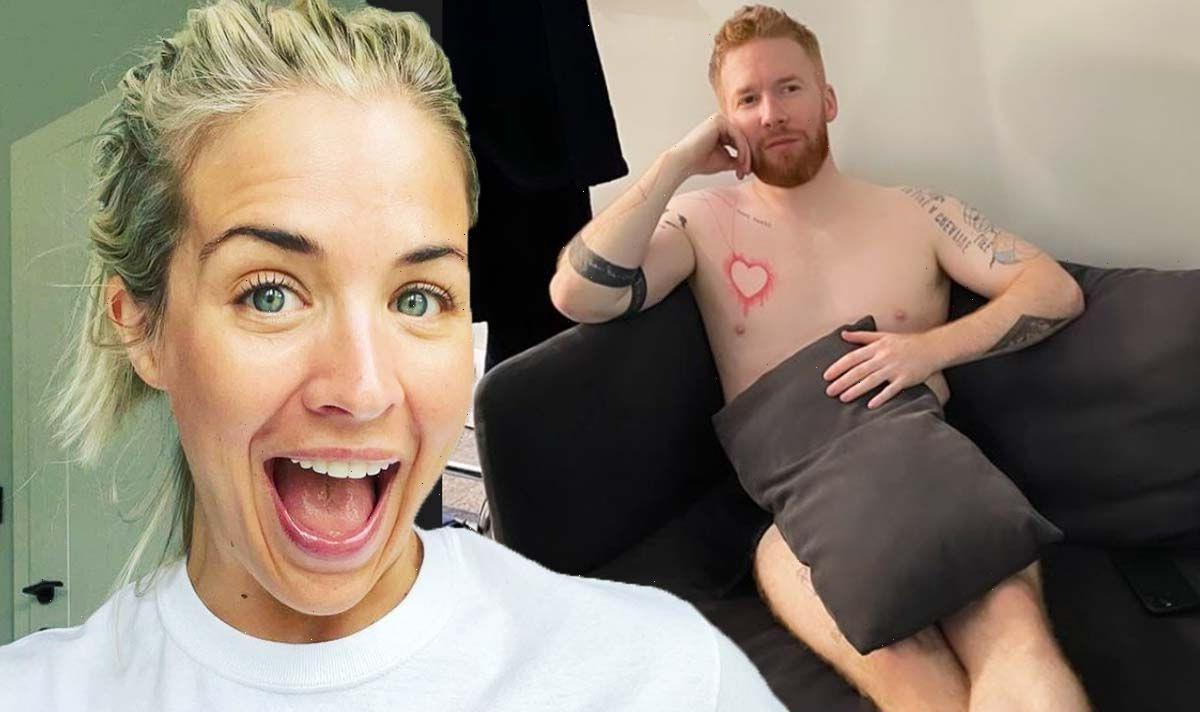 Gemma Atkinson jokes about how she 'bagged' Gorka

Gemma Atkinson, 37, has shared an insight into the backstage atmosphere at the Strictly Come Dancing tour. The Hollyoaks actress took to her Instagram last night to show her 1.7 million followers what pro dancer Neil Jones was getting up to.

In a candid snap shared on her Story, Neil could be seen reclining on the sofa wearing nothing but his underwear.

The dancer could be seen covering his modesty with a pillow while concentrating on the TV.

Gemma captioned the snap: “@mr_njonesofficial casually watching the match backstage (as you do),” alongside a face palm and laughing emojis.

In later posts, Gemma gave Strictly fans an insight into the show with a spectacular mise-en-scène, which included her partner Gorka Marquez.

Due to Gorka’s busy schedule with the Strictly tours, the couple have been forced to postpone their wedding plans.

Gemma explained that their work commitments mean the pair only have four days off together this year.

The actress explained: “Gorka is literally on tour all of this year. We’ve only got four days off together.

“He’s got the two Strictly tours back to back, and then he’ll be going on Strictly in the autumn.”

“We don’t even have a minute to sit down and begin making plans!” she told New magazine.

Gemma and Gorka first crossed paths when Gemma starred on Strictly in 2017.

However, they were not paired together at the time, as Gemma was partnered with Aljaž Škorjanec, while Gorka danced with Alexandra Burke.

They got engaged back in February 2021, having met backstage on the hit BBC show.

The pair now share a two-year-old daughter, Mia, and are preparing to walk down the aisle.

Gemma once explained that giving birth to Mia was “traumatic”, with the Emmerdale star suffering a haemorrhage and losing almost a litre of blood.

She later said that she was “adamant” she wouldn’t go through childbirth ever again.

“All these things were going through my mind, what did I do that caused all that to happen? I was telling myself for weeks and weeks I’d failed at childbirth,” she told Steph’s Packed Lunch.

“I was having horrible dreams that someone was going to take Mia from me.

“I remember my mum running into my bedroom and I was sat up screaming, sweating.”

Gemma went on to say that one day, another mum approached her and asked about how Mia’s birth “wasn’t a success”.

Her reply was: “It was a huge success, Mia’s there, Gemma’s here, total success.”