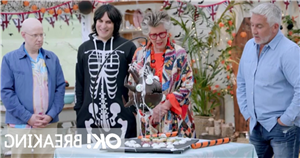 The Great British Bake Off fans waved goodbye to Dawn on Tuesday after her spine-tingling bakes failed to impress judges Paul Hollywood and Prue Leith during the show’s first ever Halloween week.

As part of the spooky themed challenge week, the contestants had first been tasked with creating an exquisitely decorated apple cake which saw Maxi and Syabira reign supreme with their delicious bakes – with both bakers earning a coveted handshake from Paul.

Dawn however, failed to win over Paul and Prue, as they commended her toffee apple decorations, but found her cake to be lacking in flavour.

Following this, the contestants then turned their hands towards a terrifying technical, in which they were asked to produce gooey and chocolate slathered s’mores by judge Paul, in a very American inspired Halloween bake.

With many of the bakers struggling to perfect their marshmallow and biscuit creations, Abdul came last in the challenge, after his marshmallow failed completely and oozed everywhere.

He was closely followed in turn by Maxi, who in a clear fall from the top spot, struggled with the technical side.

Syabira however, once again snagged the number one spot, as she wowed the judges with her mastery of the lightly toasted treat, with both Paul and Prue commending her impeccable taste and textures.

Yet it was the showstopper challenge which hammered the final nail in the baking coffin, after the judges asked the remaining contestants to produce a Halloween inspired hanging lantern bake.

With free rein to use anything from biscuits to cake, or even elaborate sugar work, the bakers quickly set to work to try and produce a spooky themed lantern worthy of any trick-or-treater.

A huge variety of bakes were presented to the judges at the conclusion of the round, including a spider inspired lantern, dead disco ball, and even a horror movie inspired popcorn box.

While several received the judges approval, in the end one became a baker’s worst nightmare as it failed to win over the judges with either taste or execution.

Dawn is now the sixth contestant to be eliminated from the baking competition.

For the latest showbiz reports and breaking news visit http://www.ok.co.uk/celebrity-news.

Check out all the latest hot topics on OK! magazine’s news section and discover exclusive celebrity news about your favourite soap actors and reality stars.

We're also on Facebook.com/okmagazineuk – for the latest online celebrity news, features, galleries and videos throughout the day from your favourite site.