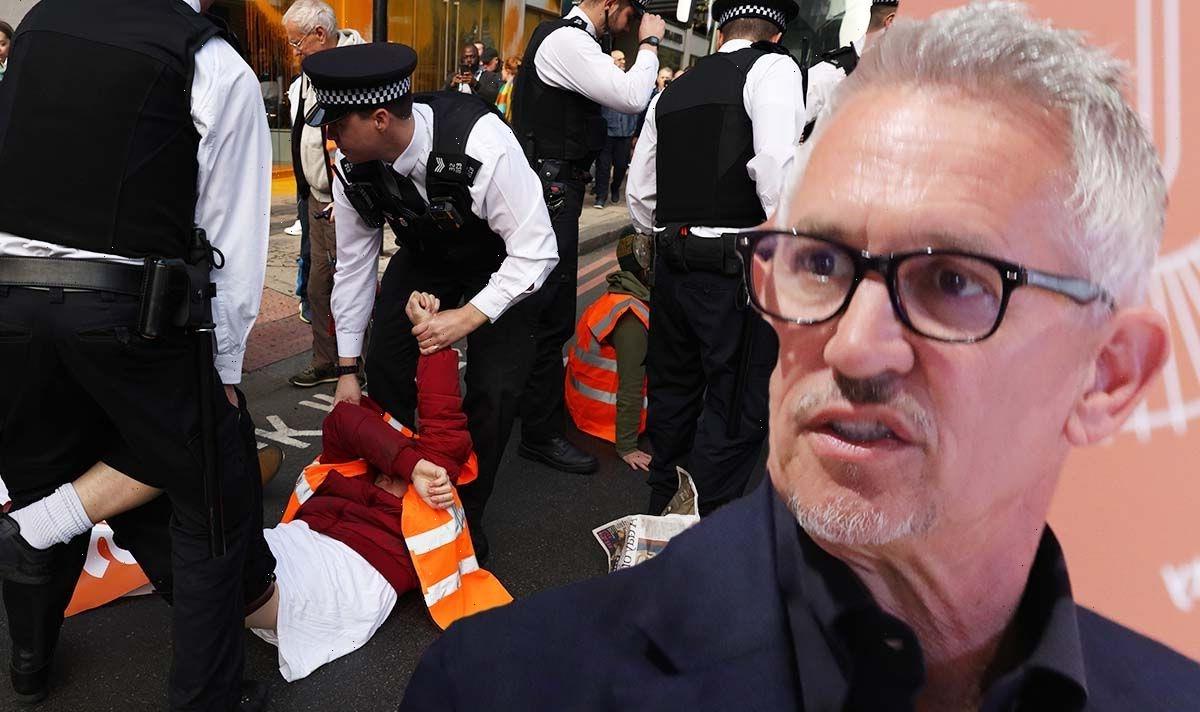 Gary Lineker, 61, received a barrage of mixed opinions earlier today after he expressed his views on Just Stop Oil protests. In view of his 8.6 million Twitter followers, the broadcaster shared a video posted by journalist Owen Jones of his interview with demonstrators.

Gary appeared to agree with the protester’s cause as he admitted the conversation was “worth a listen,” adding that “no one will listen” unless disruption is involved.

He wrote: “Worth a listen, because, like it or not, no one will listen without disruptive protest.”

Gary’s tweet sparked debate among other online users, with some agreeing with the pundit, while others questioned whether he followed his own advice.

Twitter user MrMattEllis said: “No Gary disruptive protests just anger people and turn them away from the point.”

To which Gary replied: “It may anger people, but it also gets people talking about the most important issue of our ever dwindling lifetime. Let’s see how angry people get then.”

LeftwaffenWatch enquired: “Not disruptive to you though, is it? You’re not running a business. You’re not commuting every day.”

Tom questioned: “You supporting this?”

Cronneanium commented: “Disruptive protests are no good there are many more ways people will actually listen to you what you have to say without having to try ruining art wouldn’t be promoting this or they will see it as a positive act which in truth isn’t.”

But others appeared to agree with Gary’s sentiment, as Peter wrote: “Everyone seems to be against their actions, but I can’t help but feel that hundreds of cities across the world being submerged in ocean water in the not too distant future will cause far more disruption…”

Planty commented: “It’s to save us from climate change.”

The Just Stop Oil group’s protests over the past year have resulted in multiple arrests, with more than 70 activists facing criminal charges.

The two activists, who then glued themselves to a wall in the gallery, are now under arrest.

Gary’s tweet comes after he encouraged two Premier League stars to come out as gay during the World Cup.

The former footballer revealed how two Premier League stars have been “very close” to announcing they were gay.

He added that the response from fans would be “incredibly positive,” with homosexuality being illegal in Qatar, where next month’s tournament takes place.

The Match Of The Day star spoke out on the subject in a wide-ranging interview ahead of the World Cup.

Gary also said he turned down an invitation to host the live draw in Qatar because of his concerns over human rights.