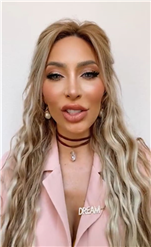 How many times has Farrah Abraham gone under the knife or the needle?

It would be impossible to count at this point, right?

She started off her plastic surgery journey soon after she achieved Teen Mom fame — she got a nose job and a chin implant.

In addition to those surgeries, she’s had tons of Botox and fillers, and a variety of injections in her lips.

There was a period of time when she seemed to be super into vaginal rejuvenation, and of course she’s awfully fond of getting butt injections as well.

And as it turns out, this week she thought it was high time to pump some more stuff into the old backside.

She shared a video of the shenanigans on TikTok, and thankfully it didn’t appear to be filmed by Sophia this time around — she seemed to be good friends with a woman who worked at the facility she visited, and she did the filming.

“She’s getting a little filler just for the little dimpling that we sometimes have as females,” the woman explained. “We get a little cellulite, we get a little more elasticity.”

“If you got all that junk in your trunk, this will help,” Farrah added with a smile and a “Yeehaw!”

And just in case you thought she might be too modest to actually document all of this … no, never mind, that doesn’t make sense.

There’s no possible scenario in which you’d have gotten this far into a story about Farrah’s butt injections and thought she’d be too modest for much of anything.

Anyway, Farrah’s friend filmed who we assume to be a doctor actually doing the injections, all while Farrah mumbled some more nonsense about the junk in her trunk.

She also said “A real doctor knows how gravity works” before winking and blowing off a finger gun.

Just so you know exactly what we’re dealing with here.

When the injections were over, she showed off the results, which you can see below:

“Oh my god, don’t be jealous,” Farrah said. “The cowgirl’s ready for some horse-riding.”

Look, Farrah is obviously allowed to do whatever she wants with her body.

But you’d think that at some point in time, a doctor would have looked at her and thought something along the lines of “You know, this person doesn’t seem well, perhaps I shouldn’t be doing this.”

She doesn’t even remotely look like the same person we saw all the way back on 16 and Pregnant, and it has nothing to do with how much time has gone by since then.

Specifically with these butt injections she keeps getting, it looks so uncomfortable because she’s so thin — her thighs are so small, they don’t even seem like they should be able to hold up that butt.

It just always feels like she’s so unhappy with so many things, that she keeps changing her appearance hoping to find something that will make her feel good and it just never happens.

What do you think about this new look?