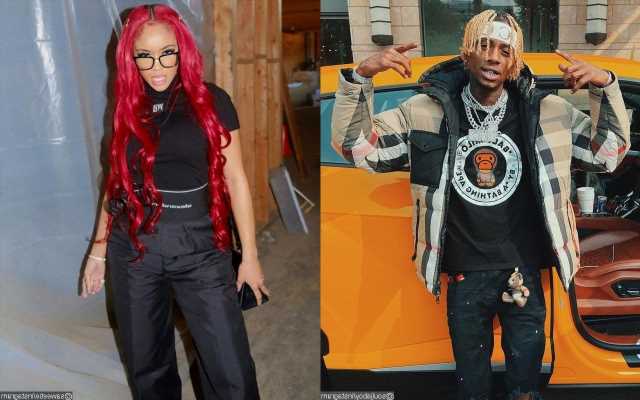 Prior to the ‘Kiss Me Thru the Phone’ spitter, fellow rapper Jack Harlow also tries to pursue the ‘Best Friend’ hitmaker on the red carpet of the 2021 BET Awards.

AceShowbiz –Soulja Boy is the latest hip-hop star to shoot his shot with Saweetie. After trying to flirt with the “Best Friend” femcee on social media, the “Kiss Me Thru the Phone” rapper had fans commenting on his attempt.

The 31-year-old MC, real name DeAndre Cortez Way, sent his special message to Sweetie via Twitter. “What a N***a gotta do to have @Saweetie,” he penned in the Friday, October 15 post.

Saweetie has yet to respond to Soulja’s post. Fans, however, were quick to give him some tips. “Yah, go buy hundreds of those Saweetie meals & give them to the peeps on the [email protected],” one user suggested, referring to Saweetie’s partnership with the fast-food chain.

“Dude just have to buy a Bentley,” another person replied. A third individual then added, “3 Saweetie meals, 2 bad food combos, and be the first nigga to treat her right.”

The “Pretty Boy Swag” spitter was not the only one who tried to pursue the “Tap In” hitmaker. Back in June, fellow rapper Jack Harlow tried to woo her on the red carpet of the 2021 BET Awards.

When Saweetie was speaking to a reporter, Jack approached her and introduced himself. “I’m Jack,” he said, to which Saweetie answered, “I know.” Saweetie then asked Jack why he is shaking. Trying to stay cool, the “Industry Baby” rapper placed his hand on top of hers, asking back, “Who’s shaking?”

Saweetie is now believed to be single after calling it quits with Quavo in March. Later in August, the former couple sparked reconciliation rumors after a source told HollywoodLife.com, “Saweetie and Quavo are currently both in New York and have quietly been spending time together on the DL.”

It did not take long for Saweetie to shut down the speculations. Reposting the report on Twitter, she described it as a “pinocchio a** article.”