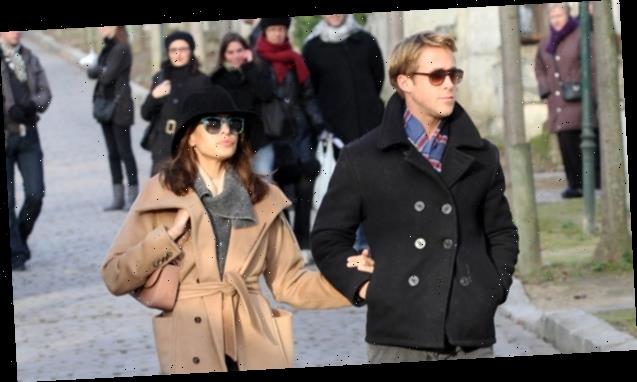 Eva Mendes and Ryan Gosling spent some quality time with their daughters, Esmeralda and Amada, during a hike in Los Feliz, where Eva was seen with a gold band on her left ring finger!

Eva Mendes and her longtime partner Ryan Gosling enjoyed some sun and fresh air in Los Feliz on January 27, where they were spotted going on a hike with their two daughters — six-year-old Esmeralda and four-year-old Amada. It was a rare sighting of the young family, but fans were nevertheless delighted to see the rare snapshots captured by photographers, which you can see here. In the photos, Ryan, Eva, and their two youngsters sported hiking attire and masks to keep themselves and others protected amid the COVID-19 pandemic.

At one point, however, Eva knelt down to adjust one of her daughter’s masks, and seemingly sported a gold band on that finger! Although the image was slightly blurry, fans could just make out the stunning gold ring that the 46-year-old actress was wearing. But this isn’t even the first time Eva has been spotted wearing a gold band.

Eva has actually been seen sporting a gold ring on her left ring finger a few times over the course of the last year. In early January 2020, the mother-of-two was spotted in Glendale wearing a similar-looking gold ring on her left ring finger. Plus, fans have noticed Eva wearing a ring in photos on her Instagram page. Then again, there are also images where she isn’t sporting a ring.

The status of Ryan and Eva’s relationship has rarely ever come into question, but fans have always been interested to know whether the long time couple, who have been together for nearly a decade, will tie the knot at any point. Regardless if the two are planning to, or have already, signed a marriage license, there’s no denying how strong their bond is. And quarantine has made it even more unbreakable.

“Ryan and Eva have been isolated at home with their kids just like everyone else,” a source shared EXCLUSIVELY with HollywoodLife in May 2020. “They don’t have nannies so they’re going through the same thing as all the other parents out there. It can be stressful at times, but they’re solid. It helps that they’re such a team.” Of course, Ryan and Eva also have their hands full with their daughters. “Their girls are full of energy, so keeping them busy at home with no activities and no play dates isn’t exactly easy, but overall Ryan and Eva are loving all this extra family time.”

The Hollywood couple met on the set of The Place Beyond the Pines sometime in 2011, and took their working relationship to the next level. They welcomed their first daughter in 2014 and their second in 2016. The two are notoriously private and rarely, if ever, spill details about their personal life, although they have let fans in from time to time. But there is absolutely no denying that Ryan and Eva’s union is as strong as ever.