Tributes poured in for Eddie Van Halen Tuesday following the rock star’s death at 65 from cancer.

Eddie’s son Wolfgang, 29, confirmed his father’s death as he took to social media with the emotional announcement.

‘I can’t believe I’m having to write this, but my father, Edward Lodewijk Van Halen, has lost his long and arduous battle with cancer this morning,’ Wolfgang said.

‘He was the best father I could ever ask for. Every moment I’ve shared with him on and off stage was a gift. 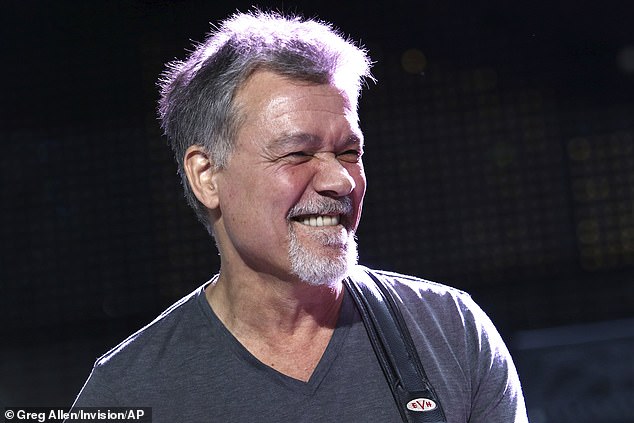 The latest: Tributes poured in for Eddie Van Halen Tuesday following the rock star’s death at 65 from cancer. The rocker was snapped onstage in 2015 in NYC

‘My heart is broken and I don’t think I’ll ever fully recover from this loss. I love you so much, Pop.’

Van Halen’s Sammy Hagar said he was ‘heartbroken and speechless,’ adding, ‘My love to the family.’

A tweet from Aerosmith’s account read ‘Rest In Peace,’ with a shot of Steven Tyler and Joe Perry with Van Halen.

Ozzy Osbourne said that the late rocker’s ‘influence on musical and especially the guitar has been immeasurable’, while Kiss alums Gene Simmons and Paul Stanley paid tribute to Van Halen. 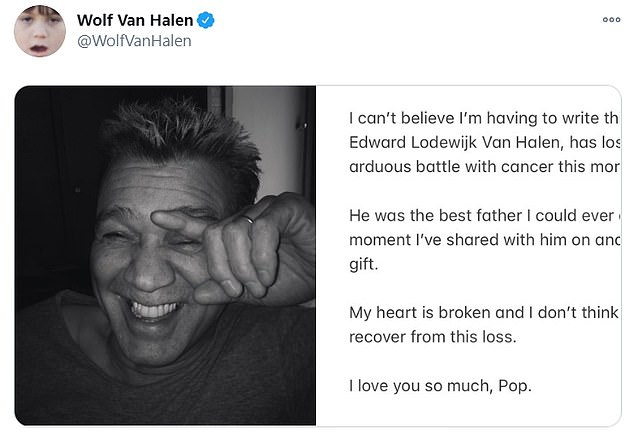 Sad news: Eddie’s son Wolfgang, 29, confirmed his father’s death as he took to social media with the emotional announcement 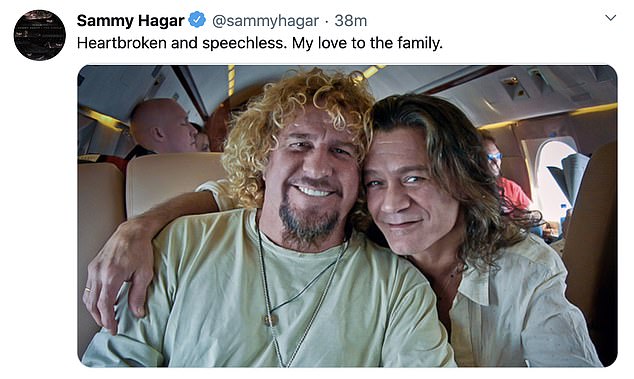 Legend: Van Halen’s fellow rock icon Ozzy Osbourne said that the late rocker’s ‘influence on musical and especially the guitar has been immeasurable’ 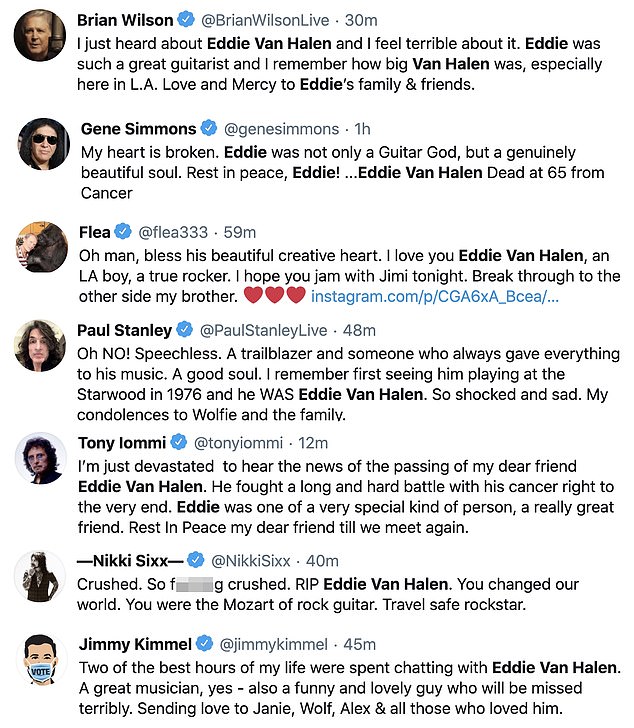 Tributes: Kind words poured in from a number of prominent celebs across show business 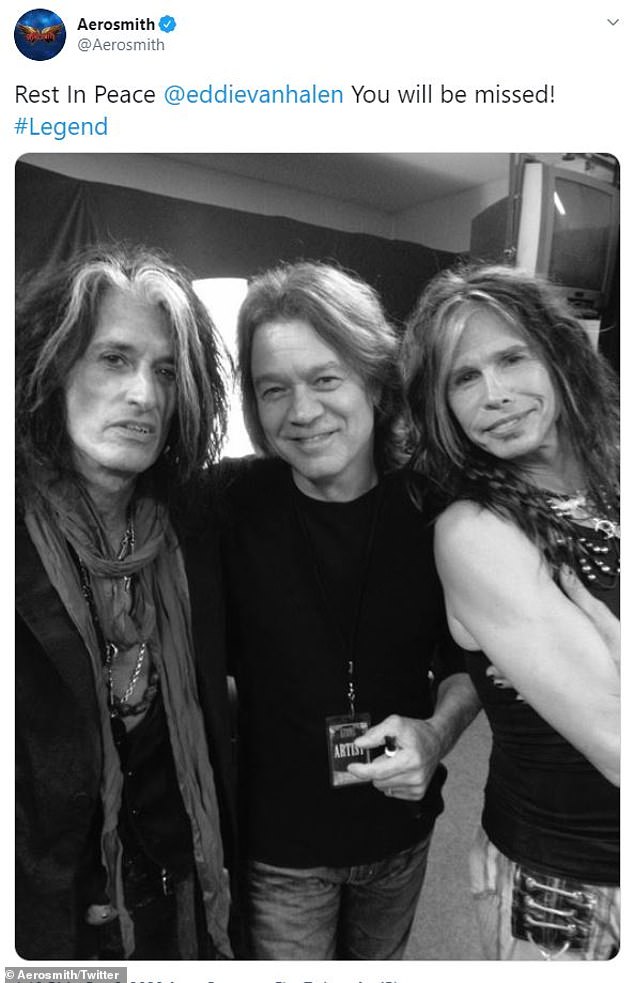 A tweet from Aerosmith’s account read ‘Rest In Peace,’ with a shot of Steven Tyler and Joe Perry with Van Halen 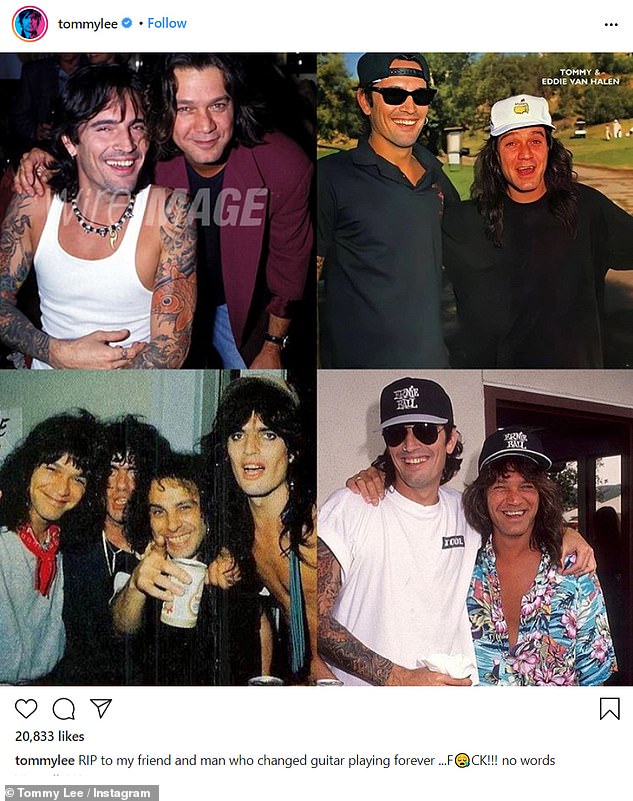 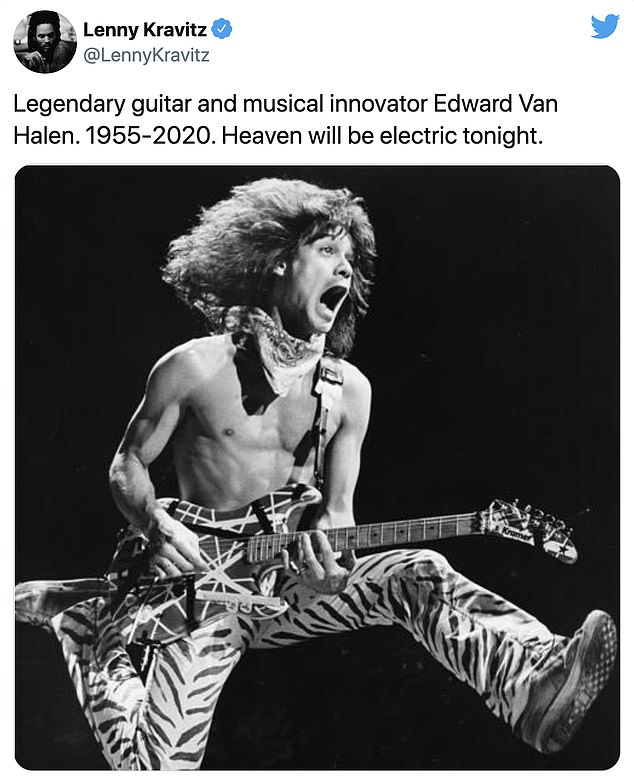 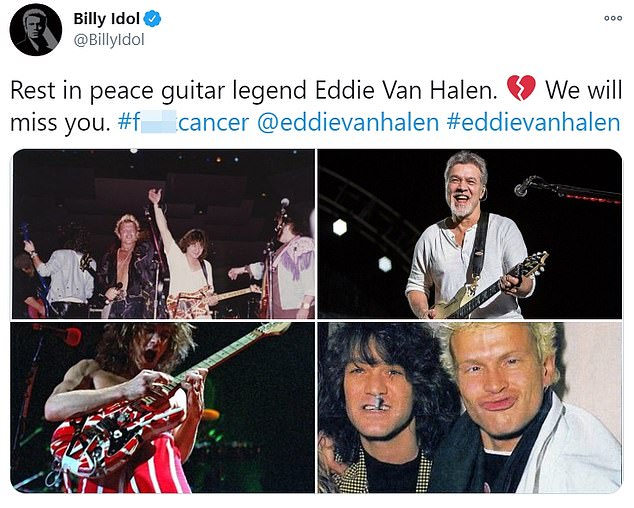 ‘My heart is broken,’ Simmons said. ‘Eddie was not only a Guitar God, but a genuinely beautiful soul. Rest in peace, Eddie!’

Stanley said, ‘Oh NO! Speechless. A trailblazer and someone who always gave everything to his music. A good soul. I remember first seeing him playing at the Starwood in 1976 and he WAS Eddie Van Halen. So shocked and sad. My condolences to Wolfie and the family.’

Motley Crue’s Nikki Sixx and Tommy Lee also paid tribute to the famed guitarist. Lee wrote, ‘RIP to my friend and man who changed guitar playing forever …F***!!! no words,’ while Sixx called him the ‘Mozart of rock guitar.’ 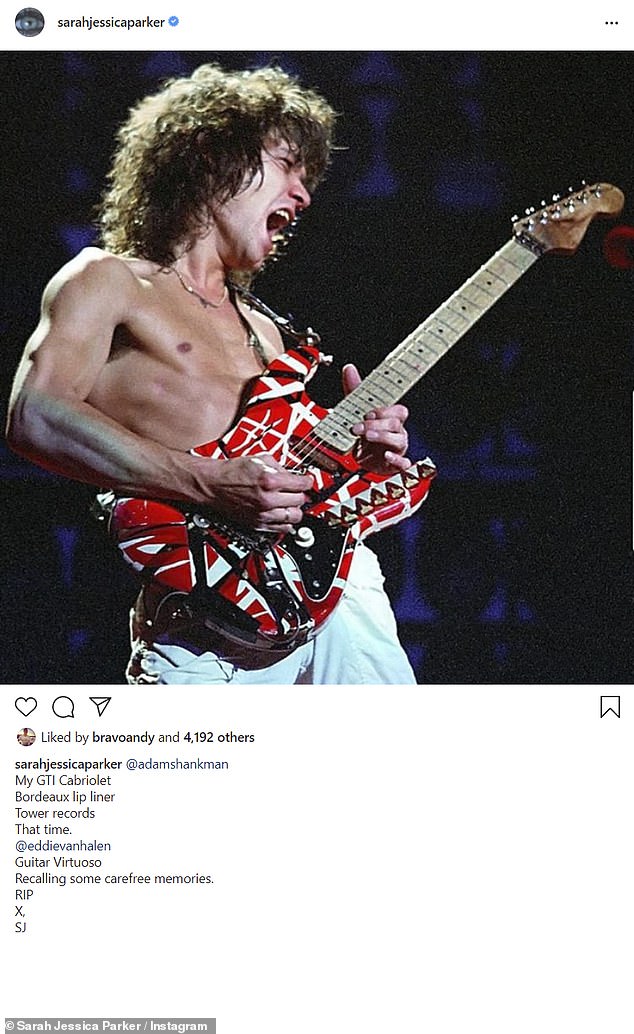 Memories: Sarah Jessica Parker looked back on her fond recollections regarding Van Halen

Sixx said he was ‘so f***ing crushed,’ adding, You changed our world. You were the Mozart of rock guitar. Travel safe rockstar.’

‘A great musician, yes – also a funny and lovely guy who will be missed terribly. Sending love to Janie, Wolf, Alex & all those who loved him.’ 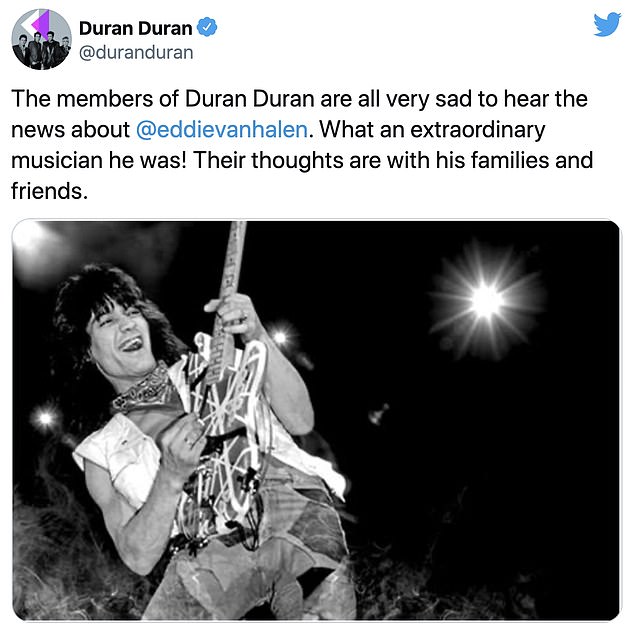 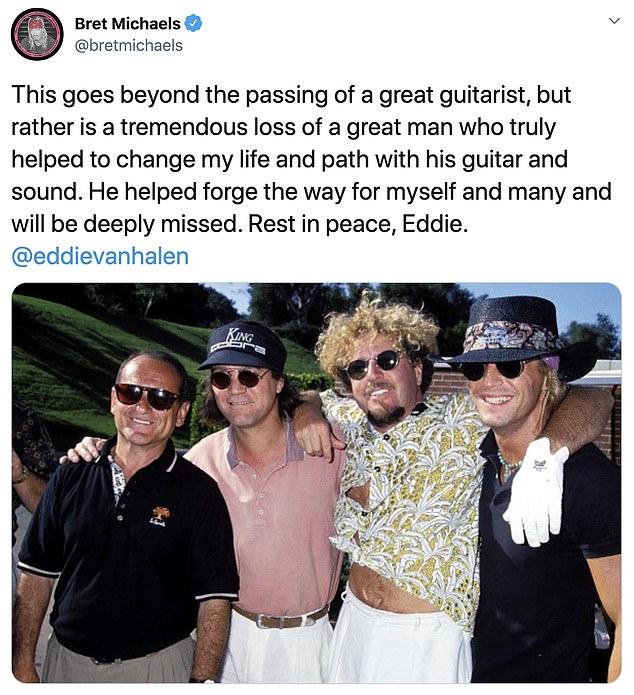 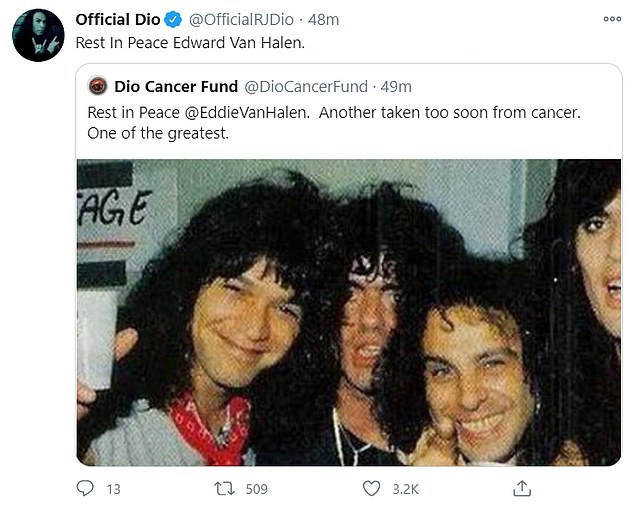 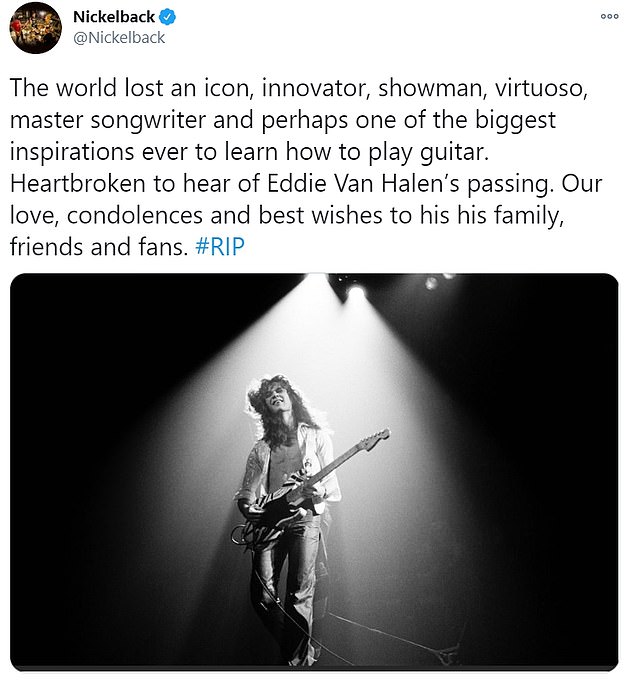 Admiration: A number of Van Halen’s musical peers weighed in on the sad news

Poison frontman Bret Michaels said that ‘this goes beyond the passing of a great guitarist, but rather is a tremendous loss of a great man who truly helped to change my life and path with his guitar and sound.

‘He helped forge the way for myself and many and will be deeply missed. Rest in peace, Eddie.’

He added: ‘No matter what kind of style you play, no one can deny his colossal influence. To have a sound not only uniquely signature to the artist, but of an entire era.’ 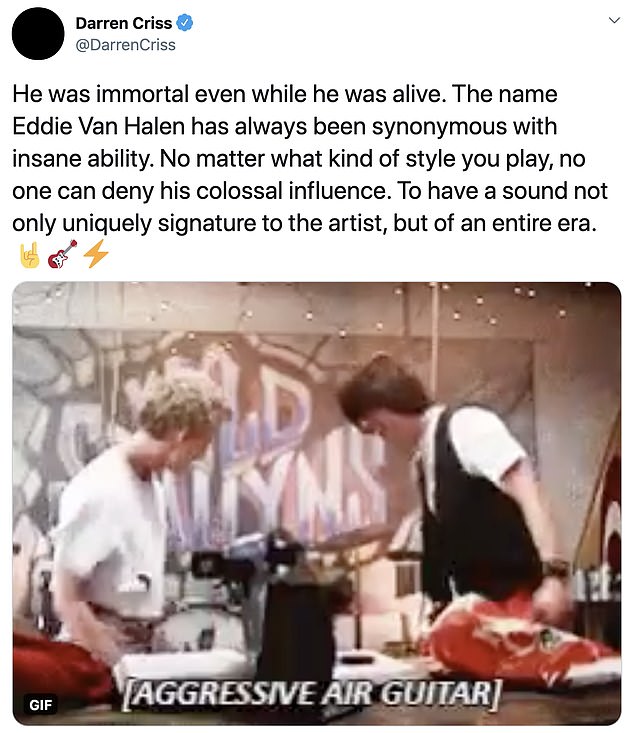 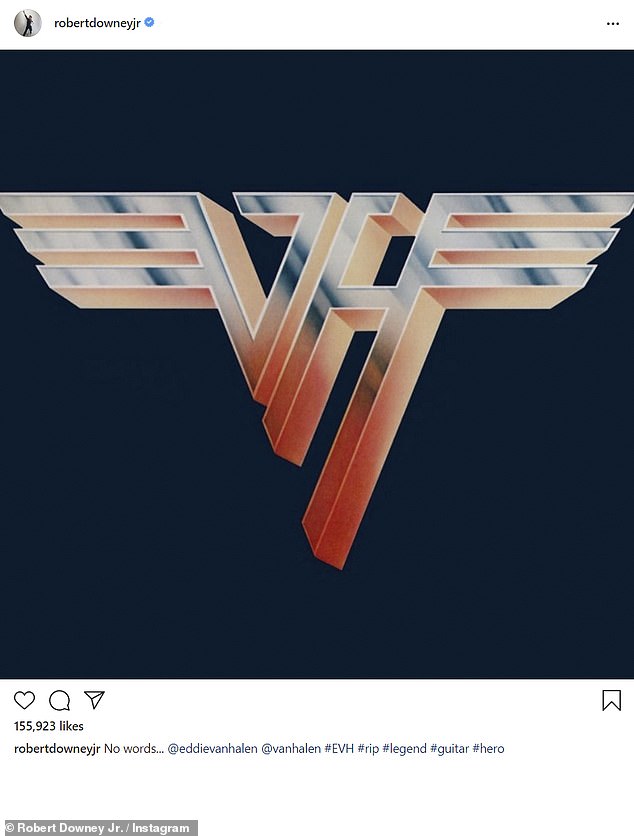 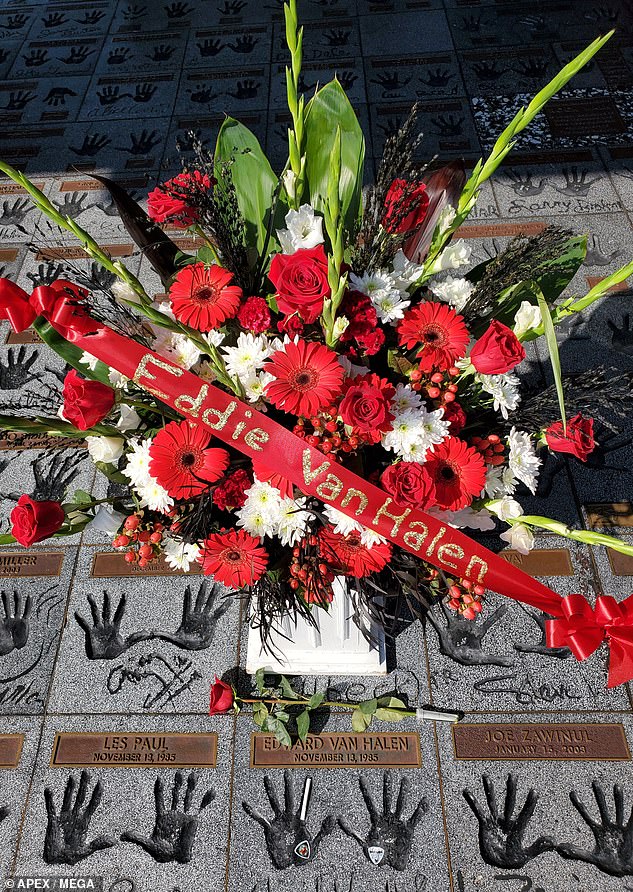 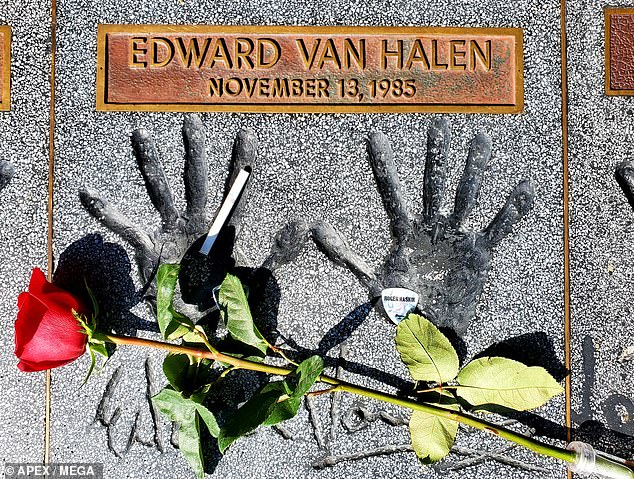 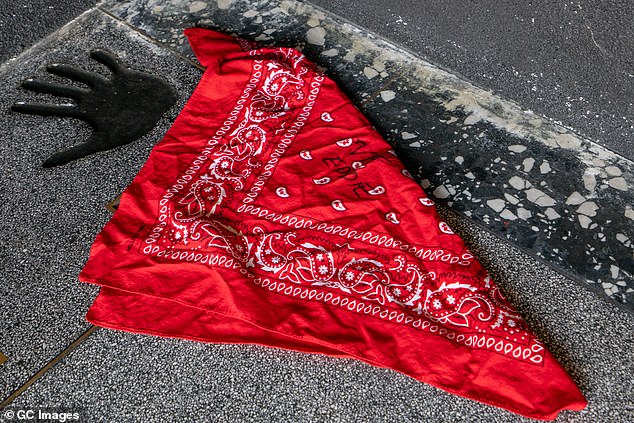 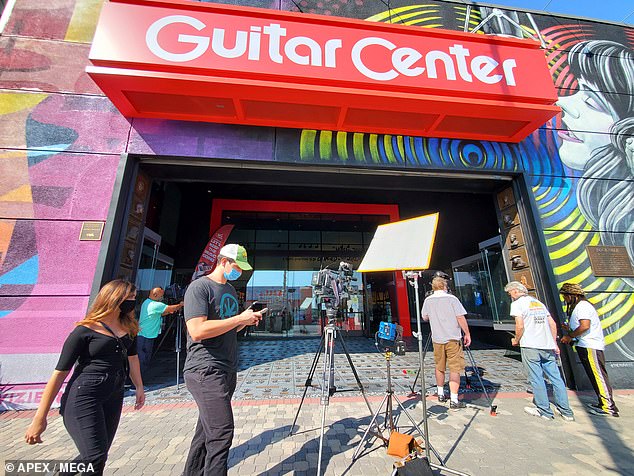