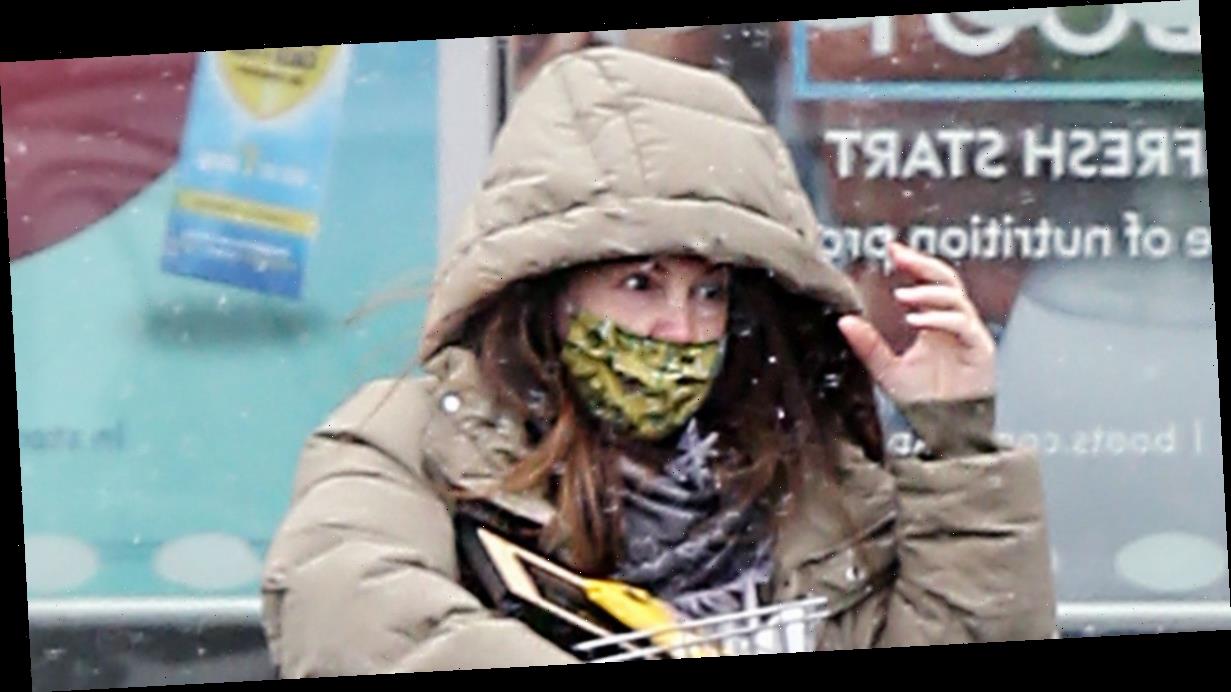 Lacey Turner has been seen for the first time since welcoming her second child with husband Matt Kay last week.

The 32 year, who is most well known for playing the character Stacey Fowler on the BBC show EastEnders, was spotted braving the snowy, windy weather to pick up essentials for her newborn.

Stepping out of her local Boots store, the actress could be seen wrapped up warm as she wore a white hoodie with some grey jogging bottoms and some classic white New Balance trainers for the outing.

The brunette beauty, who recently put on a casual display with her 18 month old daughter Dusty, teamed the outfit with a massive light brown padded winter coat and a checkered scarf.

The TV personality styled her long mane down, allowing strands to fall loose and frame her face, which she protected with a green face mask.

Lacey went bare-faced for her trip outside and stocked up on nappies for her little baby as well as several baskets before putting her hood up and making her way back to her car.

The mum-of-two announced the addition to her family exclusively to OK! VIP club members last week, revealing the baby's gender and weight.

While the star is clearly over the moon with her brood, she previously opened up on suffering two devastating miscarriages before welcoming Dusty in a heartbreaking documentary.

She explained that she returned to the set of EastEnders just one day after she had a miscarriage and acted as if nothing had happened.

Speaking about returning to Albert Square following the loss, she said: "I carried on like nothing happened.

"I was probably walking round feeling so heartbroken, yet nobody would have had a clue."

Lacey also revealed that she didn't talk to anybody about her losses, urging others going through the same pain to speak out.

She said: "I felt so lonely and I didn't speak about it. What we should have done was talked to each other, but because we didn't it actually made both of us really lonely.

"I found since opening up it has helped myself and many others, it helps to raise awareness and helps people to not feel so alone, something that is a really common feeling when having a miscarriage."

Lacey has been very open about her miscarriages, telling OK! when she announced she was pregnant with Dusty in 2019: "We've been together half our lives so I thought we'd get married then I'd have a baby.

"Well, you get there and you think it doesn't work like that, not for everybody."

After discovering she was pregnant a month after her wedding in 2017, Lacey said: "We couldn't believe it. We got to seven weeks and we sadly lost it and it was heartbreaking."

Lacey sought answers on why it had happened again with a second pregnancy, explaining: "On paper it was normal, there was nothing wrong."