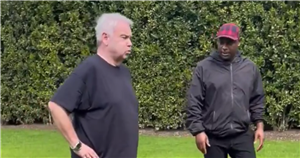 After going on a long and tough journey with his chronic back pain, Eamonn Holmes has shared a video of his road to recovery with his followers.

The broadcaster, who shared a rare adorable throwback picture with son Declan, took to Twitter to post a two minute clip of himself exercising and having physio sessions.

In the video, the 61 year old can be seen guiding his followers through his extensive workout routine, as well as working with his physio to help relieve his pain.

James appeared on camera and explained: "So I've been treating Eamonn for a couple of weeks now, so we've gone past the recoup stage, so this is the rehab stage.

"So we're trying to aim to strengthen his pelvic stability, so working on the muscles surrounding the pelvis and the lumbar spine because he's a bit jagged when he's walking now but it's improved over the weeks."

Eamonn continued: "This all looks very simple and it is very simple except it's like learning to walk again. I've lost nerves in my right leg and there's certain actions I can't do so even the most simple thing, it's hard but it's getting better."

The dad-of-four is then seen doing some weight-training as well as working out on a cross trainer machine.

As James massaged Eamonn during a physio session, the This Morning star told the camera: "The whole recuperation path there's so many aspects to it, James is the boss man.

"And you know, he has me here on the treatment table. Some of it is quite pleasant. Not a lot of it but I know he's doing a good job."

Eamonn's devoted fans rushed to comment on the video and share their happiness for the star as he shows off his recovery.

One Twitter user wrote: "Keep up the good work Eamonn. You are on the right track by the sounds of it."

Another follower said: "Oh my goodness, I hadn't realised how bad you were. I wish you well and I hope you and Ruth will be tripping the light fantastic soon. Much love. X."