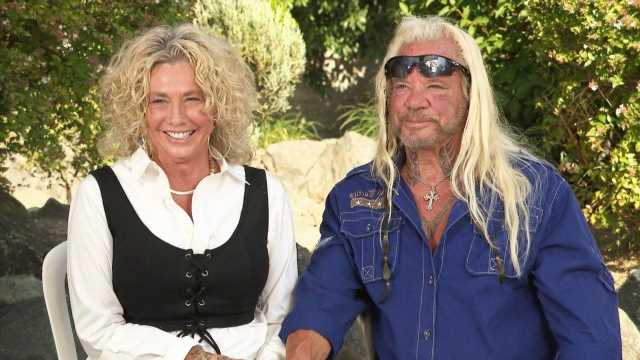 Duane “Dog The Bounty Hunter” Chapman and Francie Frane are married, ET can confirm. The couple tied the knot on Thursday in Colorado.

Dog was previously married to Beth Chapman for 13 years, up until her death due to cancer in June 2019. Meanwhile, Francie also lost her husband, Bob, who died of cancer just six months before Beth. The two bonded over their tragic losses, and although 68-year-old Dog previously told ET back in September 2019 that he would never marry again and that Beth used to joke she would haunt him if another woman ever took her place, he proposed to Francie in May 2020.

ET’s Kevin Frazier spoke to the couple on Tuesday ahead of their big day, and Francie said they would be writing their own vows and honoring their late spouses.

“It has more bling on it than I ever thought I would wear,” she shared. “It is really heavy.”

As for their wedding cake, Francie said that the two each picked out their own flavors and that they definitely don’t have the same tastes.

“So, he picked one part and I picked the other and we have several tiers of the cake and I don’t like his part and he doesn’t like mine,” she revealed with a laugh. “The reception is going to be a fun party and right after the wedding, it is all in one place. And we are going to be dancing and having a blast with all of our friends and our family and everybody that wants to share all of this with us.”

Dog cracked, “This is going to be the celebrity wedding of 2021, scoot over Blake Shelton.”

There was, however, controversy leading up to the wedding. Dog and Francie explained why they didn’t invite his 22-year-old daughter, Bonnie, to the nuptials. Bonnie claimed that she didn’t get an invite to her dad’s big day because she’s a supporter of the Black Lives Matter movement. She also alleged that he’s racist and homophobic. Duane insisted to ET that he’s never been a racist and is not homophobic, and said Bonnie was being “brainwashed.”

“She’s been fed what to say,” he said of Bonnie’s accusations. “I have three men on my staff that are gay. My daughter is gay, Baby Lyssa. I don’t understand why anybody would ever say that.”

“Would I die for a gay man or a Black man? I would lay down my life,” he also said.

In response, Bonnie told ET in an exclusive statement, “As far as the idea that I’m being brainwashed, this is the dumbest thing my father has ever said. I didn’t believe he would go this far to discredit me so much as to say I was brainwashed. I am concerned about him. He has begun to believe crazy conspiracy theories. The only credibility my dad has to speak about brainwashing is perhaps as a victim.”

Bonnie also called ET’s Kevin Frazier, who conducted the interview with Dog, to apologize for her father’s comments during the interview. She said she was “disturbed” by what he had to say.

Meanwhile, Francie shared of not inviting Bonnie to the wedding, “As hard as it is and as heartbreaking as it is, we had to make a decision that was very difficult for us. We’ve been through hell — him and I — in the past three years. … And I am not going to allow our day to be ruined by this nonsense.”

When ET spoke to the couple last September, they shared their love story. Francie, a former rancher and hunter, said she hadn’t heard of Dog the Bounty Hunter, until a friend mentioned Duane had lost his wife and that the two should meet. That was two days after Beth passed away and Francie called her friend “nuts” after she made the suggestion. Six months later, Duane, presumably needing an excavator, called Bob’s phone not knowing he had died. Francie heard the voicemail and called back, initially unaware she was talking to the television star until he mentioned he was Dog the Bounty Hunter. It was during that call the two realized they were both grieving their partners.

Duane eventually asked her out and she replied, “Yeah, if you go to church.” While she initially brushed off Duane’s advances, the emotional, tear-filled church service culminated in the two holding hands and Duane declaring, “Gotcha!”

Duane told ET that there “couldn’t have been a better pick that God picked” for him and that he “knew right away this was love.”

Francie added, “We understood the pain that the other one was feeling and [in] those tough days and moments, we helped each other stand up. We could cry with each other and talk about what we were feeling. We were able to walk alongside each other through the pain and heartbreak and it brought us together in this amazing way.”

The couple said they would continue to pay tribute to Beth and Bob, keeping important traditions they shared with them alive and honoring their death dates.

“We honor those dates and we don’t feel guilty, but it’s kind of strange,” Duane said. “But we’re in love and I say all the time, ‘Beth, I’m glad you provided me with Francie because that wasn’t on my list.'”