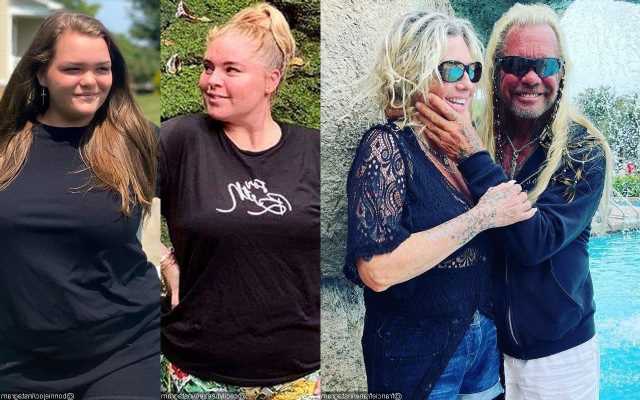 Two of the ‘Dog the Bounty Hunter’ star’s daughters believe that the reason why their father cuts them from the guest list is because they ‘resemble’ their late mom Beth Chapman ‘a lot.’

AceShowbiz –Duane Chapman‘s daughters Cecily Chapman and Bonnie Chapman are not going to attend their father’s upcoming wedding. In a new interview, the two of the “Dog the Bounty Hunter” star’s daughters revealed that they had been cut from the guest list.

Cecily went on to explain, “My only guess or idea would be that he’s just not really on the same path as me and my sister. What I’m seeing personally is that my dad is having a hard time dealing with the fact that maybe he’s not going to be able to replace my mom [Beth Chapman].” She continued, “Maybe me and Bonne bring out a lot from my mom and that he sees our mom in us and I feel like that scares him.”

Elsewhere in the candid conversation, Cecily admitted that it’s fine for her to see her dad moving on and getting married again. “That’s not the problem. I think he’s just scared that we remind him too much of our mother,” she claimed.

“There’s never anything bad from Francie, me and Bonnie. We’ve always been pretty fine with it. I mean, we think she’s a great lady and I mean she’s never done anything to us,” Cecily elaborated further. “So that’s why I feel too, like, I think this is more a personal thing with my dad towards us. Because we do resemble my mom a lot like a lot.”

Previously, Cecily confessed that she “never met [Francie Frane] in [her] life.” She also heartbreakingly noted that she’s only seen her famous dad “twice since the funeral” of her beloved mother.

Additionally, though Cecily follows Francie on Instagram, her dad’s soon-to-be-wife does not follow her back. After exposing her family feud, Cecily revealed she had decided to call off her wedding to her fiance Matty Smith that was planned for December this year. “I am not getting married,” she said.

Duane is scheduled to exchange vows with Francie in September this year. The couple became engaged in May 2020, less than a year after his wife Beth lost her battle with cancer.

“I would love to have the biggest wedding there’s ever been,” Duane told The Sun. “I’m sorry but that’s just me. I hope I can talk Francie into it and open it to my fans, the Dog Pound, to everybody.”