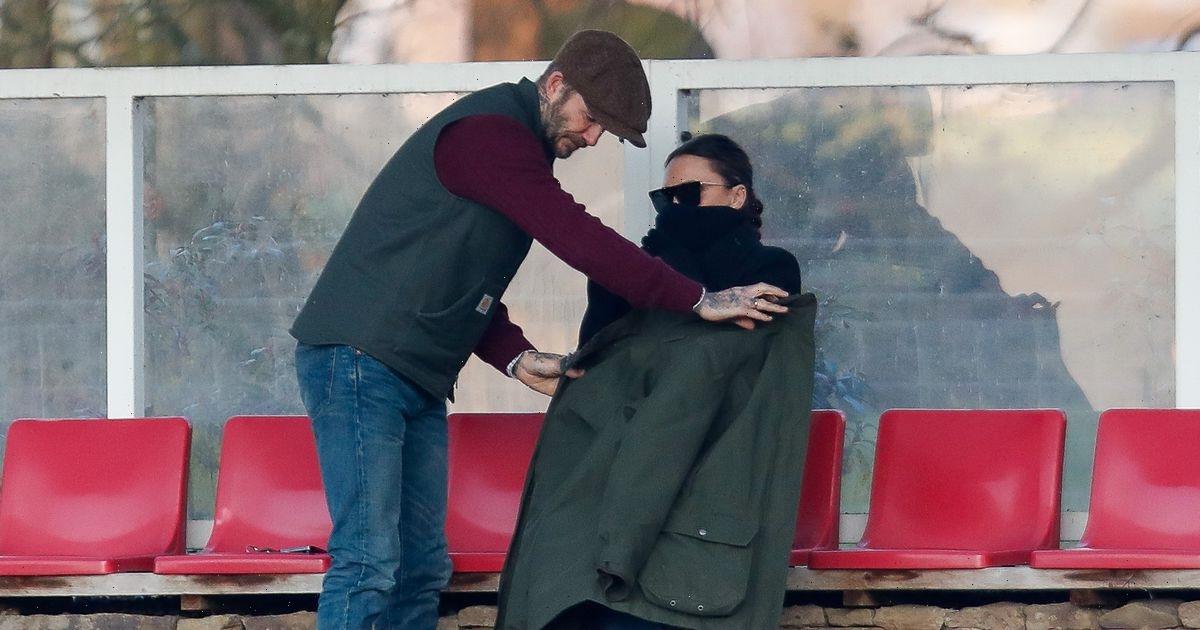 David Beckham proved he's quite the gentleman as he wrapped his freezing wife Victoria up in his coat as they watched their son Romeo play football.

Former footballer David, 47, and Spice Girl-turned-fashion-designer Victoria, 48, were in the stands at St Georges Park, Burton upon Trent to see their second-eldest son play for Brentford B against Huddersfield Town B.

The January chill was clearly too much for Victoria as she sat wearing a long black coat and blue jeans with a black scarf wrapped around her neck and face, all the way up past her nose as it sat underneath her dark sunglasses.

Manchester United legend David sat beside her in a warm fleece, jeans, a flat cap and a long green farmer-style coat before he gallantly removed his jacket and placed it on his wife of 23 years, as he even tucked it in around her.

David might be a little more used to the cold than his wife, as he is a fan of ice baths, which are supposed to have a multitude of health benefits.

He took to Instagram to share a video of himself jumping into one in what appeared to be the gardens of his home, whilst frost could be seen around him on the ground.

The hunk showed off his many tattoos in nothing but a pair of boxers and a wooly hat as he breathed through the shock of the ice-cold water whilst birds could be heard tweeting soothingly in the background.

He captioned the post: "WOW. Still thawing out 2 days later."

David and Victoria are one of showbiz's strongest couples, having been together since meeting in 1997 in the Manchester United Players Lounge, when both were achieving global stardom, Victoria as a member of girlband, the Spice Girls, and David one of the world's most famous footballers.

Speaking to British Vogue in 2016 about their fateful meeting, Victoria said: "… Love at first sight does exist. It will happen to you in the Manchester United players' lounge — although you will get a little drunk, so exact details are hazy."

The family are known to be super-close, with David and Victoria often posting sweet snaps with their children, although the pics are often missing their eldest son, Brooklyn.

Brooklyn spends much of his time now in the US with his wife Nicola Peltz, who he married in a star-studded ceremony in April 2022, which was attended by the likes of Desperate Housewives' Eva Longoria and celebrity chef, Gordon Ramsey.