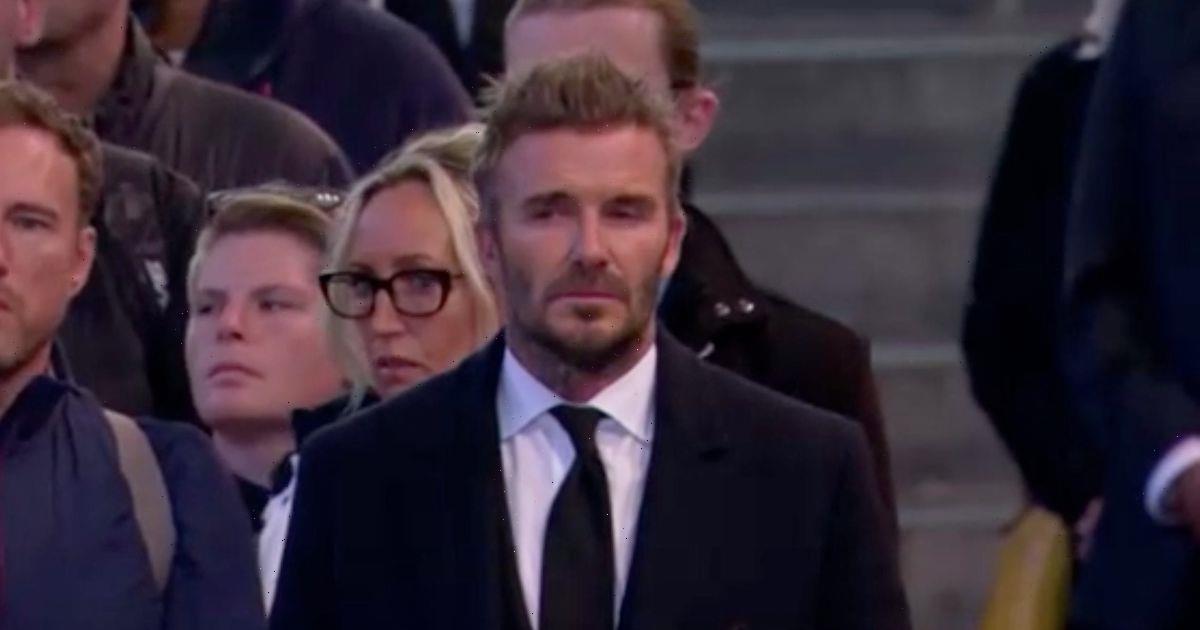 David, 47, kept a low profile wearing a dark flat cap and suit as hejoined thousands of other mournerswaiting to view the Queen’s coffin at Westminster Hall in London.

While he’s only been spotted in the last couple of hours, the former footballer revealed he has been queuing since 2am.

Once inside the hall, the husband of Victoria was visibly emotional and was seen touching his eye and holding his hand to his face as he approached the Queen's coffin.

The dad-of-four bowed his head in respect at the late monarch's coffin, before walking out of the hall and making way for other mourners.

Speaking to ITV news when he was in the queue, David said that he feels “lucky” that he was able to meet the Queen prior to her passing.

Asked if he has any funny anecdotes about his time with the late monarch, he discussed receiving his OBE.

He said: “To receive my OBE, I took my grandparents with me, who were the ones that really brought me up to be a huge royalist and a fan of the royal family, and obviously I had my wife there as well.

“To step up, to get my honour, but then also Her Majesty, to ask questions, to talk, I was so lucky that I was able to have a few moments like that in my life, to be around Her Majesty.

“It’s a sad day, but it’s a day for us to remember the incredible legacy that she’s left.”

Earlier today the Department for Digital, Culture, Media and Sport were forced to pause entry to the queue after it reached capacity. Mourners are now likely to wait for at least 14 hours to see the late Queen’s coffin.

Fans on Twitter have been praising David for waiting in the queue, rather than use a VIP entrance.

“David Beckham queueing 12hrs to pay respects to the Queen – further proof that he is, fundamentally, one of life's good guys,” one person wrote.

Another wrote: “I can’t believe David Beckham is in The Queue and has done the full 12 hours like everyone else just all casual while wearing a flat-cap and being photographed by fellow queuers the entire time.”

She posted on Twitter: “Evening – along with my lovely mum and her very good friend, I have just experienced a moment in history – witnessing the Queen lying in state in Westminster Hall. At once majestic and peaceful.”

Some of those in the queue will witness the King, the Princess Royal, the Duke of York and the Earl of Wessex hold a 15-minute vigil around their mother’s coffin at about 7.30pm this evening.

For those who are not able to attend in person, a continuous livestream of the Queen lying in state has been set up by a number of broadcasters including the BBC and ITV.