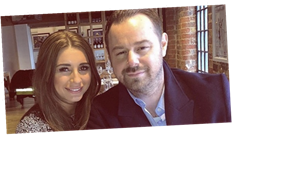 Danny Dyer has shared his sadness and concern as his daughter Dani Dyer is set to give birth amid the pandemic.

EastEnders actor Danny, 43, said he was "very upset" as he won’t be able to meet his first grandchild for some time due to the national lockdown.

Love Island star Dani, 24, is due to give birth to her first child with her boyfriend Sammy Kimmence very soon.

And as father and daughter discussed the upcoming arrival on their podcast Sorted with the Dyers Danny, who recently revealed his real name, shared his distress.

He admitted: “I’m obviously a bit concerned because you’re having a pandemic kid, which rules out me going up the hospital.

“I don’t think I’m allowed to see my own grandchild. That is very upsetting.”

It comes after mum-to-be Dani, who recently showed off her unborn child’s nursery, shared her anxiety about giving birth as her due date looms.

Dani took to her Instagram feed to share a short clip of her nursery before opening up on how she's been feeling.

In the caption, the soon-to-be-mum wrote: “The best room in the house,” followed by a red heart emoji.

She then detailed her restlessness as the former Love Island star continued: “Starting to lose sleep with anxiety as baby’s coming so so soon now, (watching the night stalker also didn’t help me at all!) anyone else feel like this?

“I’m so excited but so nervous at the same time, keep thinking am I organised, am I missing something, is there anything else I can do all these emotions going round in circles haha.”

Dani, who recently cradled her baby bump in her final maternity range, added: “Counting down the days,” followed by a stars emoji.

But, if she does want to hurry things along her dad Danny recently shared some tips to help her get labour started.

Speaking in another episode of the father-daughter podcast the Mick Carter actor suggested: “You're meant to have a roll about! And a curry. Or sort of smother yourself in the curry.”

Meanwhile, pregnant Dani revealed she’s been trying a number of things to try and get things moving along.

“I’m drinking my raspberry leaf tea, I've been bouncing on my ball.”

Dad Danny then added: “You had a ruby the other night didn't ya!"

“Yeah I did, I didn't really want the hot curry!” Dani said. “I’ve been putting Tabasco on everything! I am trying, but apparently that's all a myth!”