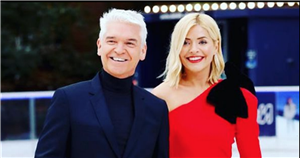 It's that time of the year when a whole host of celebrities will soon be descending upon the rink as part of the new Dancing on Ice line-up.

With excitement building over the months over who could make up this year's dazzling cast, ITV has finally started releasing the names of the stars set to take part in the beloved competitive series.

Phillip Schofield and Holly Willoughby will once again host the new series while dancer Ashley Banjo and skating icons Jayne Torvill and Christopher Dean will make up the judging panel.

John Barrowman will not return for his judging duties in January 2022 for the new series, with ITV thanking him for his "two brilliant years".

So which stars from the world of acting, music, presenting and more will be skating their way to the rink this year?

Read below to check out the 2022 Dancing On Ice line-up as it's announced.

Coronation Street star Sally Dynevor was the first star to be announced for Dancing On Ice.

Speaking to Lorraine on Monday morning, the 58 year old admitted that the opportunity was now or never for her.

"If I don't do it this year, I don't think I'm ever going to do it. I'm completely out of my comfort zone… I've just got to try and enjoy this experience," she said.

Sally, whose daughter is Bridgerton's Phoebe Dynevor, added: "This morning I was really nervous because only a few people knew about it.

"But now that everyone knows about it, I'm really scared," she added before admitting that she had no previous ice skating experience.

Bez from the band Happy Mondays was announced as the second contestant by Phillip Schofield and Holly Willoughby on This Morning on Monday morning.

The seasoned percussionist and dancer was initially hiding in a big white egg chair at the corner of the studio when the presenters shared the news with viewers.

Welcoming Bez, 57, to the sofa, Holly began: "You are known for being a dancer, a dancer of a different variety. Why Dancing On Ice?"

"Well, you know at the moment, it's more like Bambi on ice not Dancing On Ice, how I got picked, I don't know because I was absolutely awful at the audition.

"But they must have seen some potential in me."

The star went on to say he was "really looking forward" to the competition, which starts in January, and he's not feeling nervous about the steep learning curve.

"Learning a new skill, and like I say really looking forward to Christmas ice rinks again, and I can get on there and really show off," he continued.

Dancing On Ice returns to ITV in January.