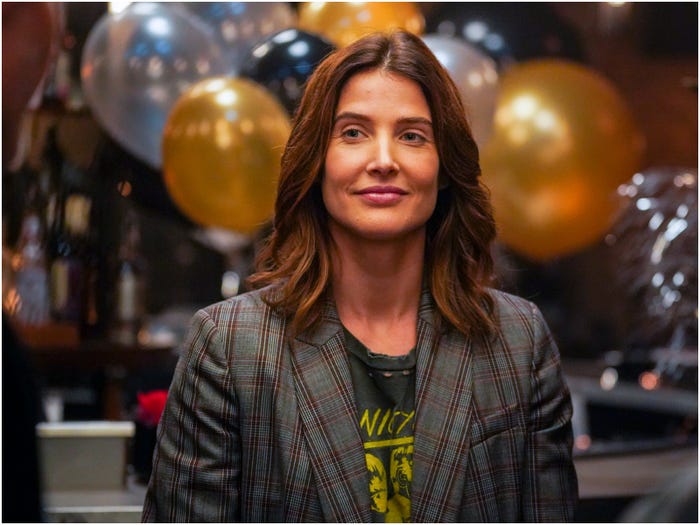 The day before Insider's phone call with Cobie Smulders people across California woke up to the eerie scene of dark, orange-tinted skies; a result of the morning sunlight being filtered through the heavy smoke of California's worst fire season in recent history.

And to set the tone of our interview, Smulders, who is best known for her decade-long performance as Robin on CBS's "How I Met Your Mother," quickly reminds us of these events.

"You know in California right now we have raging wildfires. We need to all come together and respect nature and respect our forests because they're under siege," she says before describing herself as a dedicated "environmentalist."

Smulders has no inflated or self-aggrandizing ideas about her role in protecting the environment, rather she explains that she feels compelled to act "because I'm a human living on a dying planet."

"I don't take life for granted, I would love to live in a way where I leave very little behind," she says. "I want my children to be able to enjoy the planet the same I have and I don't know if they'll be able to and I personally don't understand how people can have the mentality where it shouldn't be a top priority."

Lockdown, she tells me, has been "an interesting time" for her and her family because of the en masse virtual migration everyone has been forced to make. "We're all on a lot of streams, which is not my vibe at all," she says. "I've worked so hard to keep our home pretty screen-free even though it is my business. It is how I make a living."

Earlier this year Smulders took a bold career move and stepped away from the comedic persona she honed on "How I Met Your Mother" and took a dramatic turn in ABC's Portland-set crime drama, "Stumptown." The show is based on a comic book series of the same name and Smulders plays Dex, a moody ex-marine turned private investigator trying to dig her way out of debt.

The show, which ironically takes its name from a nickname used to refer to a period of wide-scale deforestation in the pacific northwest, premiered in late 2019 and was a breakout with critics hailing Smulders' mature, dramatic performances.

It was quickly renewed for a second season in May before falling victim to the pandemic. Earlier this month Deadline first reported that ABC would not be moving forward with the second season due to COVID-19 production complications. Now, according to Deadline, the show will be shopped to other networks.

And after a summer of continual protests in Portland against racial inequality and police brutality sparked by the killing of George Floyd in Minneapolis, Smulders tells us that she saw the second season of "Stumptown" as an opportunity to "highlight the injustices" as well the "emotional clashes that are happening and help the people of Portland."

"It will change the show 100%," she explained. "It can't not have an effect on the tone of the show." Largely peaceful demonstrations have taken place in Portland every night since May with some protestors clashing with undercover federal agents sent to the city by the Trump administration, a move that Oregon lawmakers have denounced as "authoritarian."

Beyond her steady performances on television, Smulders, 39, has also enjoyed a long cinematic career having spent more than a decade at the heart of Marvel's "Avengers" saga, appearing in pretty much every superhero offering since 2012.

One of the biggest draws of the Avengers experience has, of course, been their wide-scale theatrical releases something which, due to the pandemic, has been suspended. Earlier this week it was announced that the upcoming "Black Widow" origins film originally scheduled for a November release has been pushed back to 2021, making 2020 the first year since 2009 without a Marvel film release.

And despite the possibility of a future dominated by straight to streaming film releases becoming more realistic – prompted by the success of Universal's VOD roll-out of "Trolls World Tour" and Disney's "Mulan" – Smulders believes that theatrical releases are still integral to both the cinematic as well as human experience.

"I feel like that shared experience in a cinema is one of the few we have left," she says. "It has to come back I think. I think both movies and going to see movies at that scale are going to come back and are going to survive. I'm sure Marvel will keep putting out great films in order for us to do so. I don't think it's going to go away it's just taking a little nap."

However, there are currently no plans to reignite "How I Met Your Mother" despite constant fan-fueled rumors around a supposed big-screen adaptation. The popular CBS comedy first aired in 2005 and ended after a ninth season in 2014.

"There's always a possibility," she says. "Apparently this was the 15-year reunion which someone reminded me recently. I would do anything for charity so I'm always open to it, but there's nothing in the works to tell you about, but I like those people so I would hang out with them any time."

THEN AND NOW: The cast of 'How I Met Your Mother' 6 years later