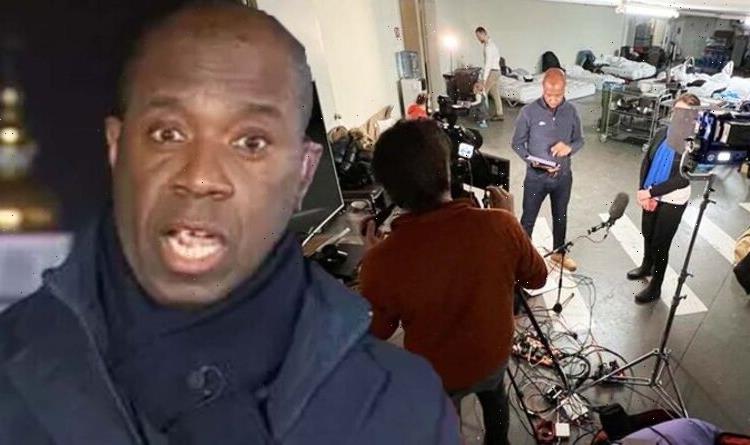 BBC's Clive Myrie sheds tear as he reports from Ukraine

Clive Myrie, 57, has been praised for his commitment to reporting the latest news on Russia’s invasion of Ukraine from Kyiv. The BBC News reporter has faced terrifying conditions in the war zone to be able to deliver updates from the ground.

As well as seeing him on TV, fans have been following his Twitter account to stay up to date with his situation.

In new posts last night, Clive showed a glimpse into the underground bunker he had been staying in with his BBC team.

He retweeted a picture shared by BBC’s Chief International Correspondent Lyse Doucet of the filming set up against a backdrop of beds in which he could be seen reading in front of the cameras.

Along with the retweet, Clive added the caption: “The Bunker Broadcasting Corporation!”

In a separate tweet, Clive gave his 134,000 followers a further update into his night in the bunker.

He penned: “The bloke sleeping next to me in this underground bunker is seriously snoring.

Clive’s tweet racked up more than 46,000 likes in just hours, with fans sharing their messages of support.

JohnBhoy1964 typed: “Would imagine that it’s an achievement, in itself, to get any kind of quality sleep/rest where you are just now.

“Am in awe of the courage and bravery shown by the Ukrainian people at this time.

“Truly inspirational to the rest of the world.” (sic)

Soniast94597425 said: “I was really worried about you and Lyse last night.

“I was shouting please get out of there and go home.

“Respect to you and your team.”

Chembabe1966 penned: “You are doing such great work under such highly dangerous conditions.

“Stay safe. If he’s snoring he’s alive. And you can hear him, so you are too.

“I’m so scared for you all, please be careful.”

Earlier this week, Clive left fans concerned as he shared a video of an explosion that he said was the “closest yet to our base”.

He said: “Now back in the underground shelter in Kyiv, our position shaken by nearby missile fire.

“Windows shook. Closest blast yet to our base. Fighting coming closer to heart of #kyiv.” (sic)