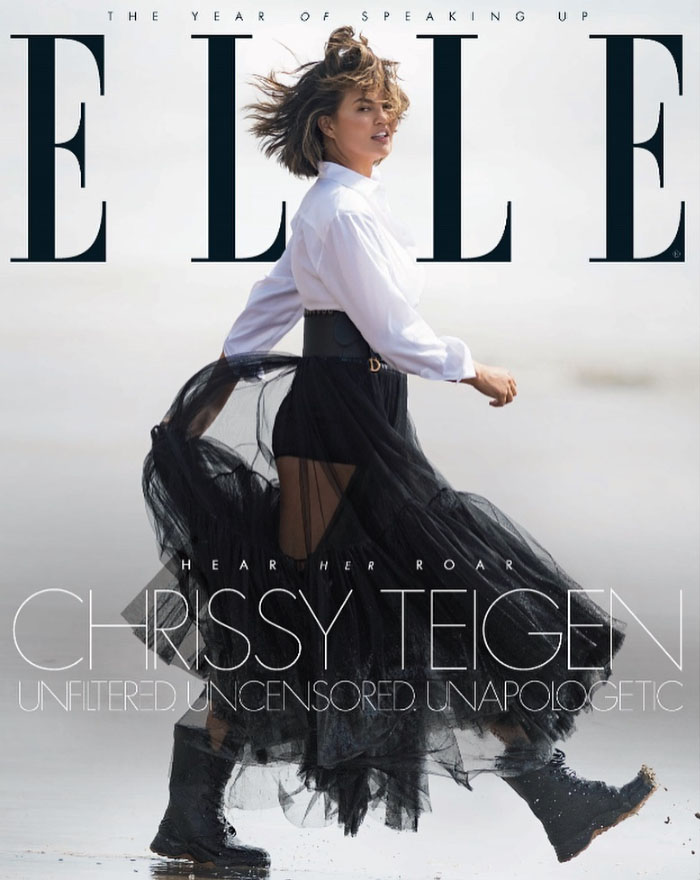 Chrissy Teigen is covering the January issue of Elle UK. She’s polarizing, but there are plenty of people who respond to her like I do, with indifference. I appreciate when she speaks out against the administration or is particularly clever owning trolls, but I also find her tiresome in large doses. She finds a way to get in the press just about every few days somehow. To her credit, she usually comes across as genuine and not like she’s trying too hard. When you work online chatting to people for years you get exceptionally good at it. Anyway Chrissy talks about body image, about her pregnancy weight, and about her relationship with her husband John Legend, whom she married five years ago. I really like them together and Chrissy explains why they work so well – he’s quiet and thoughtful and she’s spontaneous and loud. We all knew this about them but it’s nice to hear it from her.

On how Instagram models set unrealistic expectations
People get FOMO, or they feel bad about their bodies, and I get it. If I feel bad seeing certain things, what about that girl who has no connection to this industry? It makes me sad, because that’s not really how it is.

On stretch marks and scars
‘Everyone Photoshops them out,’ she exclaims. ‘It’s insane. And I don’t want anyone to feel like they’re the only ones. I was on a Victoria’s Secret shoot and it was a big turning point for me to see those women with scars and stretch marks and bruises. Who’s to say it’s even a flaw?’

On fashion being more inclusive
Fashion is definitely kinder to women now. Some brands cater to a lot of different body types, so it’s obvious now who supports women and who doesn’t… I’ve never seen women have more fight in them than now. We’re ready to stir the pot and bring issues to light.

She loved being pregnant
I think it was mostly the eating binges, though. John used to make this sandwich and leave it for me at midnight. I’d literally just grab it in the night and eat in the dark. Miles was like 4.5lbs and I gained 60lbs. I had a good time!

She won’t let John work out in front of her
[John works out an hour before she gets up in the morning.] He can’t work out while I’m awake because I’ll stop him. I’m just bitter. Seeing your husband get fit while you’ve got your post-baby body, I’m like, ‘F-k you, take a day off!’

She weighs herself three times a day
Since I was 17, I’ve known my weight in the morning, after lunch and at night. And trust me, that number was wildly different then! But I wasn’t as happy.

Why her relationship with John works
He’s quieter than me, which isn’t saying much. But he’s more thoughtful, whereas I’m spur of the moment. I can’t hide things very well. If I feel it, you’ll see it on my face, but he’s better at covering. I was never that big into music. Still to this day, I’m very Top 40. And I’m more emotion-based than him. I can see everybody’s side of an argument.

I like what she said about how her weight doesn’t determine her happiness and yet she still admits to being petty about John working out in front of her. I’m sure she’s telling the truth about both of those things. She’s fun, she’s outspoken and she’s living her life online and letting the world have a glimpse into it. Even when she’s like “look at my stretch marks” it doesn’t seem that calculated. Maybe that just comes with a lot of practice. As for weighing herself three times a day, I only do it once a day, but will admit to being way more influenced by those numbers than I should be. Reading that beautiful models feel insecure too helps me put it in perspective.

This series that Chrissy posted is FUNNY

where do I put this thing

where do I put this thing