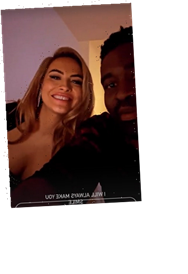 They weren’t exactly an unlikely pairing, given their Dancing With The Stars connection.

And what began as a low-drama breakup is beginning to explode.

The two were even embroiled in a mild scandal for having an inappropriately large family gathering.

Love or not, we’re in a pandemic, and fans were nauseated to see such a large group under one roof.

Of course, you wouldn’t know that if you looked back at her Instagram photos.

Chrishell may still be on Keo’s page, but he’s nowhere to be found on hers.

On February 26, Chrishell and Keo announced that they had split after three months.

“They had a fun time together,” a source told Entertainment Tonight at the time..

But in the end,” the insider explained, “decided it would be best if they part ways.”

“They are still friendly and cordial,” the source characterized.

“It wasn’t a messy breakup,” the insider claimed.

The source added that it “just wasn’t the right fit or right timing.”

“He enjoyed his time with Chrishell,” their insider described.

The source continued: “And was 100 percent in it.”

“He’s had a tough time with his mom’s passing,” the insider added.

“But,” the source added, “he really wanted to make his relationship with Chrishell last.”

That didn’t sit well with Chrishell at all, and she took to her Instagram Stories on Friday evening.

“Ok I TRULY wanted to keep this drama-free,” she began dramatically.

“But,” Chrishell continued, “playing the victim and bringing your mom into it is a step too far for me.”

Chrishell then teased: “Until revelations told to me recently have made me question if you could even order a coffee without lying.”

She also posted a link to a podcast: “Liar, Liar: How to Break Free from Habitual Lying.”

This was an obvious vaguepost about Keo given her more explicit accusations in her Stories.

Some followers questioned the wisdom of Chrishell being so darn messy, warning her that this could backfire.

“Yes, I am aware,” she then wrote in response to her followers.

“If I end up alone with cats — it was worth it,” Chrishell assured them.

“But I am also human and not a robot,” Chrishell expressed.

“When you are the ass in the breakup,” she began.

Chrishell continued: “& then the other person tries to let you save face and take the high road publicly.”

Chrishell suggested that it was “probably best not to poke a bear holding receipts.”

“I will try to be a better person tomorrow,” she wrote.

“Was I messy? Yes. But I appreciate this truthful, non manipulative change of tone,” Chrishell later wrote on Saturday.

She referred to how Keo had allegedly (via an inside source) acknowledged that he had wronged her.

“I appreciate all of your supportive messages btw) Let my mess be a lesson to CALL OUT BULL,” Chrishell concluded.