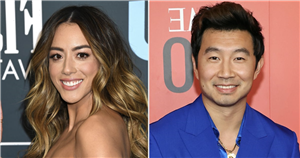 Crossovers in the comic world are always fun to see on screen, but real-life interactions between franchise stars are even better! On June 16, Marvel actors Chloe Bennet and Simu Liu caused quite the stir among fans when they posed for a trio of selfies and shared them online. “Oh look it’s marvels first asian superhero..and @SimuLiu is also in the pic too,” Bennet captioned a shady tweet on Thursday. Liu joined in on the joke, too, and posted a similar set of pictures on his Instagram page with the caption, “Marvel’s first Asian superhero posing with some guy.”

While the “Agents of S.H.I.E.L.D.” actor may have been poking fun with her claim as Marvel’s first major Asian star (Liu is the first Asian superhero in a Marvel movie), the truth behind the joke is a reminder that Marvel only recently started ramping up its diversity efforts.

Bennet, who is of half-Chinese descent, joined the Marvel world in 2013 when she was cast as her character Daisy “Skye” Johnson in “Agents of S.H.I.E.L.D.,” while “Shang-Chi and the Legend of the Ten Rings” breakout star Liu joined the MCU in 2019 when he was cast as the titular character of his film. Both actors take pride in their heritage but have also expressed frustrations over the lack of Asian representation in Hollywood.

“I mean, as long as we’re talking about it, the change isn’t necessarily complete, if you know what I mean,” Bennet told Looper in a 2020 interview. In a 2021 interview with Yahoo Finance, Liu said, “What I’m starting to see is that the gates are opening. . . . ‘Crazy Rich Asians’ was kind of the moment that opened the floodgates for all of us. But it doesn’t mean that we should be content with A, you know, the opportunities that we’ve had, and B, with just being told when our time is.”

Bennet’s latest claim seems to be in good fun, but the real hope is to see more Asian actors join the likes of people like her, Liu, “Doctor Strange” star Benedict Wong, and other talented Asian writers, directors, and creatives.

Check out Bennet and Liu’s selfies above and ahead.