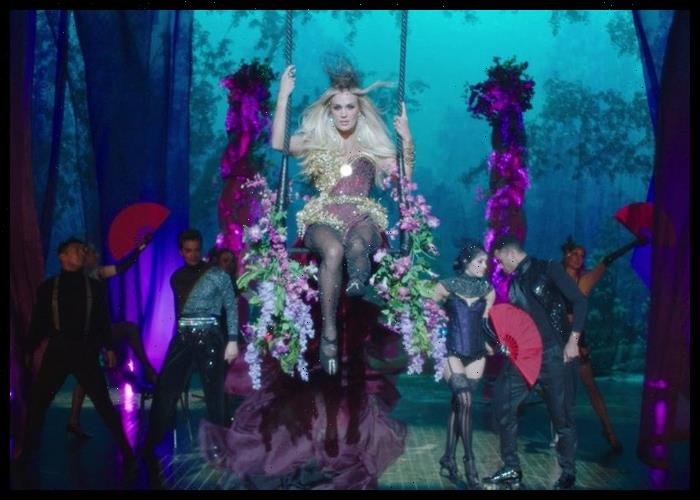 On the eve of her return to headline the Mane Stage at the Stagecoach Festival, Carrie Underwood released the world premiere of the cinematic official music video for her new single “Ghost Story.”

Carrie has also teamed up with YouTube for an exclusive Stagecoach pre-party on Saturday, which took place just prior to her livestreamed headline performance from Stagecoach.

Released on March 18, “Ghost Story” is currently climbing the charts and is the lead single from Carrie’s upcoming album Denim & Rhinestones, due on June 10.

“Ghost Story” was written by Josh Kear, Hillary Lindsey and David Garcia and co-produced by David Garcia and Carrie. The hot new single was performed by the superstar at the recent Grammy Awards and also for the 2022 CMT Music Awards.

The music video was filmed at famed 1931 movie palace, the Los Angeles Theatre.

Carrie, who also performs on a trapeze in the video, says, “Randee St. Nicholas has an incredible eye and always knows how to film everything in the most unique and beautiful way. I am very visually-oriented and from the first time I heard ‘Ghost Story,’ I had a vision for how I wanted to bring this song to life in performance and Randee always takes everything to a whole other artistic level beyond my own imagination.”

Fans can order from physical retailers at https://carrie.lnk.to/DenimAndRhinestonesPR.

The vinyl edition will be available in July and a cassette version on August 5.