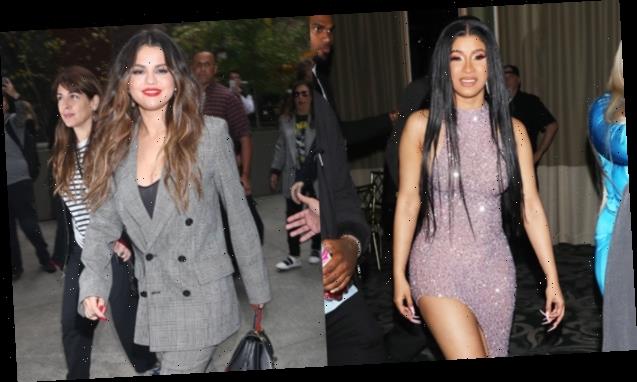 Cardi B showed Selena Gomez a lot of support in a series of tweets she shared on March 11.

Cardi B showed so much love and support for Selena Gomez in a series of tweets she posted in the early hours of March 11, after the “Lose You To Love Me” songstress, 28, alluded to potentially retiring from music in a new profile with Vogue. “I don’t think Selena should retire,” Cardi initially confessed in her March 11 tweets. “She makes good music & her fans love her. I think she needs one more Era,” the Grammy winning rapper, also 28, continued.

Clearly, Cardi is a fan of Selena’s music, too, and would love to see the pop star go through an “edgy” era of her music. “[An era] that no one ever seen her as. I would love to give her some ideas,” she went on. However, Cardi did understand the pressures that women in the music industry face, and stood firmly by whatever Selena’s ultimate decision would be as far as her future in music.

“I like Selena tho,” she continued. “I defend her cause she is such a sweetheart in person. Us celebs get picked apart all the time but she is just to [SIC] sweet to go thru that. If she wants to leave, leave cause you want too [SIC] not cause of these f**kers,” Cardi continued.

Cardi tweeting her support comes nearly two days after Selena confessed to Vogue how her approach to, and relationship with, music has changed. “It’s hard to keep doing music when people don’t necessarily take you seriously,” she shared in the April issue of the magazine. “I’ve had moments where I’ve been like, ‘What’s the point? Why do I keep doing this?’”

Selena elaborated on her feelings, and even cited a recent experience she had with her 2020 album, Rare. “‘Lose You to Love Me’ I felt was the best song I’ve ever released, and for some people it still wasn’t enough,” she revealed. Fortunately, because of her incredibly dedicated fans, it doesn’t seem like Selena is going anywhere anytime soon. “I think there are a lot of people who enjoy my music, and for that I’m so thankful, for that I keep going.”

And it appears that she might try something new in the next era of her music. “But I think the next time I do an album it’ll be different,” she added. “I want to give it one last try before I maybe retire [from] music.” We’ll see if Selena takes up Cardi B’s offer on hearing some advice in the future. Could we see a collaboration out of this? Only time will tell!