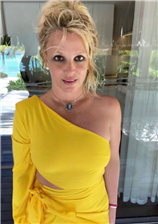 Over the weekend, Britney Spears returned to Instagram after briefly ghosting the site and deleting her account.

We still don’t know what happened, whether it was an accident, a shift in mood, or something worse.

Britney went on to delight fans and followers with a can’t-miss baby bump photo.

On Friday, Britney Spears shared a video of a heavy pregnant stomach, with visible fetal movements.

“Mommy … get me out of here!!!!!” she captioned, alongside a string of emojis.

It is only natural that followers quickly asked the obvious question.

“Got something to tell us?” one commenter asked below the post.

Another bluntly questioned: “Are you pregnant??”

Hysterically, another wrote: “STOP!!! I ALMOST HAD A HEART ATTACK OMG BABY #3 IS COMING.”

As we can all see from the video that Britney shared, it is clearly a TikTok, and she even credited the TikToker in her caption.

But sometimes, people allow excitement to rob them of their senses.

In fact, even someone not noticing that Britney was sharing someone else’s video could easily pick up on how Britney’s tummy was not featured.

In all of her recent photos and videos, both before and after that post, Britney’s tummy is clearly flat, not full to bursting with a third trimester offspring.

And if we look at the timeline of things, for Britney to be as pregnant as the person in the video, she would have had to conceive during her conservatorship.

For years before Britney was finally freed from her father’s control, it was reported that she wanted more kids.

Those who knew her best shared that she longed to have another child.

Britney wanted to marry Sam and raise at least one baby together, giving her sons a much-younger sibling.

This stopped being hearsay when Britney said as much herself during her historic courtroom testimony in June of 2021.

Speaking to the judge, Britney conveyed that she wanted to marry, have children, and generally make her own choices.

At the time, fundamental human rights like her body autonomy were denied to her.

Yes, this included simple reproductive freedoms like the right to get pregnant.

Before Britney spoke out, it had been said by friends of hers that she had “Handmaid’s Tale style” restrictions over her choices.

That much was true, as Britney revealed that she had been fitted with an IUD that she was not permitted to remove.

Now, it seems likely that Britney just saw that the video was a fascinating look at a very active fetus visibly moving, and shared it.

Millions of people use social media similarly every day, without feeling the need to write out “obviously this is not me, folks.”

However, because Britney has so many followers — some of whom seem to be very vocal and totally lack critical thinking skills — things get blown out of proportion.

What we can reasonably say about the post is that it’s clear that pregnancy is on Britney’s mind.

That doesn’t mean that she’s going to rush into things, just that she looks forward to her next milestones with fiance Sam Asghari.