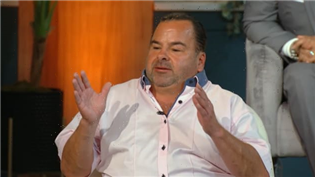 This week, 90 Day Fiance fans finally got an official announcement that Big Ed Brown and Liz Woods are engaged.

They revealed that their on-again, off-again romance was more bonkers than anyone had realized.

Now, they have more to share about why they broke up in the first place before reconciling.

Ed says that they “rushed” things … and admits that he was a terrible person, obsessed only with himself.

“The timing wasn’t right and it was rushed,” he confessed.

Turning some of the blame onto his current fiancee, Ed added: “we both rushed things.”

“I would narrow it down to timing,” Ed continued of the breakup earlier this year.

Ed says that, after the breakup — when he broke up with her via text a total of eight times — he went to therapy.

Ed’s goals were to cope with the breakup and to improve himself, he alleges.

This is tricky, because on the one hand, we all wish that more toxic men would work out their issues with a therapist instead of inflicting them upon others.

At the same time, some fans worry that Ed is using his stint in therapy as a smokescreen to absolve himself of past wrongdoings.

“I wasn’t a good person,” Ed admitted, echoing a sentiment made by millions of viewers.

Along a similar vein, he added: “I wasn’t a good boyfriend.”

While that was true with Rosemarie Vega (and, let’s face it, likely other relationships), Ed specifically referred to his mistakes with Liz.

“I didn’t treat Liz like she deserved to be treated,” Ed stated accurately.

“I wasn’t a good listener,” he added.

“That was all about me,” Ed emphasized. “I was so consumed with [myself].”

For her own side of things, Liz Woods had a hard time after her ugly breakup with Ed.

“I struggled a lot when we broke up,” she stated earlier this week.

“I went through a really bad depression stage,” Liz detailed.

Liz exposed Ed’s rotten behavior at the Season 1 Tell All and on social media.

Somehow, after the Tell All, Ed was able to talk her into a “reunion” in a hotel room.

But after, he broke up with her again … via text message. A cruel, twisted thing to do to someone.

Apparently, what lured Liz back into Ed’s life against her better judgment was the tragic passing of his dog.

She reached out to him, as many exes might.

They began to talk — over email, of all things — and slowly reconnect.

That reconnection turned into a reconciliation and renewed relationship.

Overnight, getting back together turned into an engagement.

Literally, it was overnight — they got back together on Saturday and were engaged on Sunday.

The Single Life Season 2, which premiered on Discovery Plus on Friday, November 12, will show this reconciliation, apparently.

But first, it will show Ed’s return to the dating scene as he initially attempts to move on from Liz.

We don’t know everything that will go down (there is, at one point, an apparent shooting), but it’s sure to be messy. Can Ed really change?