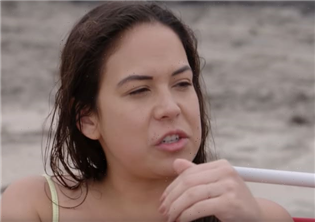 For a lot of reasons, 90 Day Fiance fans have wondered if Big Ed Brown and Liz are still dating.

Liz strongly hinted that they are not, while Big Ed says it’s just a “rough patch.”

Apparently tired of the ambiguity, Liz made her exact feelings clear about her ex.

She called him a narcissist, and explained exactly why she “left Ed’s ass in Vegas.”

First, she shared a quote to her Instagram Stories.

Though it doesn’t look like Liz personally wrote it, the quote’s meaning is obvious.

“At the beginning of the relationship,” the quote begins, “the narcissist will get to know you very well.”

“He will want to know everything about you,” it continues.

“Your likes, your dreams, your hopes …” the quote lists.

“But more importantly,” the quote warns, “your fears, your hurts, your embarrassing secrets.”

“And,” it cautions, “the things you would give your life to protect.”

The quote characterizes: “He is so easy to talk to.”

“In fact, you’ve never met anyone like him in your life,” the quote observes.

“You truly open up to him and share everything,” the quote predicts.

“But then when the mask slips,” the quote concludes, “you realize that he uses those things against you.”

Then, Liz opened up elsewhere on Instagram to explain what went down.

“I left Ed’s ass in Vegas because Tiffany’s friend was so rude making the comments,” she began.

“And Tiffany prided into it,” Liz added. (Prided?)

“I didn’t want it to affect Ed’s night,” Liz admitted.

“Because he was oblivious to it,” she observed.

“I tried to be the bigger person,” Liz characterized.

“Ed tried to pick a fight in old town Las Vegas in front of a crowd,” she added.

Ed did so in part by “asking me what was wrong.”

“I kept my mouth shut,” she explained.

She was “begging him to talk about it in private.”

“He kept pushing for it,” Liz wearily accused.

“We got back to our hotel,” she narrated.

Liz recalled: “And Ed was so upset I didn’t want to discuss something so personal in public.”

“He called the airline in front of my face at 3am to book a ticket home,” Liz shared.

“Trying,” she explained, “to leave me in Vegas.”

“He left the room to finish the call,” Liz noted.

“And,” Liz continued, “I didn’t know he didn’t go through with it.”

“Me thinking he went through with it,” she explained.

Liz wrote that “I went online and booked a ticket myself!”

She concluded: “I am not sorry for it.”

Honestly? Good for her.

We all knew that Big Ed was a toxic manipulator, but clearly, Liz had not seen that side of him.

Fans all hope to learn more at the coming Tell All.